I've just been reading the book reviews in this months Fortean Times. One review, about a book titled The Ancient Giants Who Ruled America, mentioned red-haired bodies discovered on the west coast of Florida. The book description on Amazon states they were buried circa 7500 BCE. I've had a look online, and although there are articles and videos about the excavations, I can't find any pictures of the mummies themselves :( The book looks pretty cool though, maybe I'll buy it.
Posted by Neil at 4:38 PM No comments:

My brother recently bought me a book titled The Encyclopaedia of Alien Encounters by Alan Baker. Having just devoured it I'll now share the relevant red-hair related ET-isms. 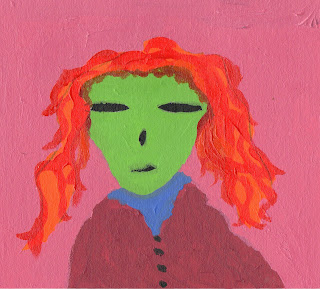 (artwork: how I imagine a red-haired
alien would look)
I'll start with the Antonio Villas Boas case. I think I mentioned this one before somewhere but it bears repeating - mainly for its Star Trek style sexual content. It apparently happened in 1957, Antonio Villas Boas was a young Brazilian farmer out working the fields when he encountered a circular spaceship. He was kidnapped by the humanoid occupants of the ship and taken aboard. After being stripped naked and subjected to medical procedures he was then left in a room where he encountered another alien being - this time a female. I'll quote directly from the book now;


...Antonio was shocked to see a beautiful woman enter the room. She was about five foot tall and completely naked. Her face was entirely human, except for her large, catlike eyes and rather pointed chin. She had long white hair, although her pubic hair was bright red ...he and the woman had sex. Her technique was rather unusual: she did not kiss him, but nipped him on the chin and made barking noises.

The woman then rubbed her belly and pointed skywards - apparently indicating that she would have his baby up in space somewhere. The book doesn't mention if Captain Kirk was jealous or not.

A more scary tale of red hair visitation apparently occurred at Dakelia Barracks in Cyprus. In 1968 a British Army NCO had an encounter there with a terrifying 'incomplete humanoid being'. It occurred at 3 o'clock in the morning after he was alerted to a strange presence by his Turkish wolfhound growling. After hearing a high-pitched humming sound..


..the soldier moved carefully and silently to the door of his room, while the wolfhound uncharacteristically scampered under the bed and began to whimper.

He opened the door and stepped on to the landing, at which point he was confronted by the thing. It's described thusly;


...only the head and shoulders were visible - dressed in a light blue suit with a collarless neck. The scowling face, inclined forward, was bright orange in colour; the hair was red, and the eyes were large and unblinking.

He ran back and hid in the room, then picked up an underwater spear and fired it through the door. The humming sound then immediately stopped. He was left shaken by the encounter but made a full recovery, the dog however 'remained fearful of the slightest noise for the rest of its life.'

Rouge hair also cropped up in another case, this time involving a guy named Jose Antonio da Silva. He was out fishing when he was accosted by some space people and dragged aboard their ship.

They eventually returned him - 250 miles from where he had originally been abducted. He later discovered that he'd been gone for four and a half days.

The book also mentioned a broader category of red-haired aliens. These are called Oranges in UFO circles.


The Oranges are said to be quite similar to humans in appearance, although their hair is red, their skin has an orange tone, and there is something of the reptilian in their faces ...it has been suggested that the Oranges are a hybrid race, but one that has been produced through the fusion of humans and Reptoids, rather than humans and Greys.


Looking at all these tales from a red-hair point of view it's interesting that they all fall under the same historic archetypes associated with red hair - sex, fear, dwarfs, dragons.
Posted by Neil at 1:21 PM No comments:

I was reading a book about Tarot Cards and was surprised to learn that hair colour plays a bit of a role in Tarot readings.

The Minor Arcana cards have four suits - Wands, Cups, Swords and Pentacles, corresponding to the Clubs, Hearts, Spades and Diamonds in a normal deck of cards. Also like a standard deck each suit contains cards numbering one (ace) to ten, then subsequent cards representing people. The slight difference being that the Tarot have an extra one - King, Queen, Knight and Page as oppose to just King, Queen and Jack.

The book didn't illuminate on how old this tradition is - understandably so given how murky and interesting the history of the Tarot is in general. An on-line search was likewise unfruitful. However, on the Wikipedia page it states that the suits equate to different social classes. Wands = peasantry, Cups = clergy, Swords = nobility and Pentacles = Merchants.

So going by that the redheads would be the common folk I guess.
Posted by Neil at 2:44 PM No comments: