Red Hair in Russia - The Udmurts and The Romanovs

It seems like ages since I've posted anything on here, so a new post is well overdue. Today's topic is red hair in Russia. Firstly, I came across the following colour photograph of the Romanov royal family. 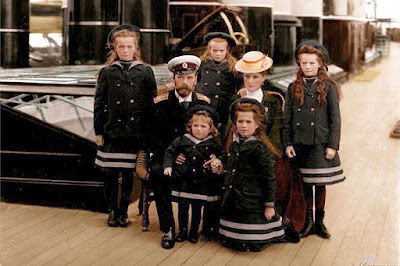 They all look incredibly red-haired to varying degrees in it. Obviously the original photograph will have been black and white, so it can't be taken as verbatim. I wonder how the tints and shades are chosen though. Is there some method, or is it just essentially guesswork? Perhaps something worth looking into in future articles. It does add a little more weight to some of the quotes we've mentioned on here previously though, which have stated that various members of the Romanov family had red or red-gold hair.

I've also been trying to dig up some more information regarding the Udmurts. These are people who live in and around the region of Udmurtia in Russia. Also known by the label Votyak, they are said to be the most red-haired people in the world.

"The Votiaks are the most red-headed men in the world, fiery red is the epithet."

Journal of the Royal Anthropological Institute of Great Britain and Ireland, Volume 3 (1874).

A quick Google Image search will bring up examples of this fiery hair colouring, though it's sometimes difficult to tell which images show actual Udmurts, and which just show redheads in general.

There's also the following BBC article from 2014 on the topic. 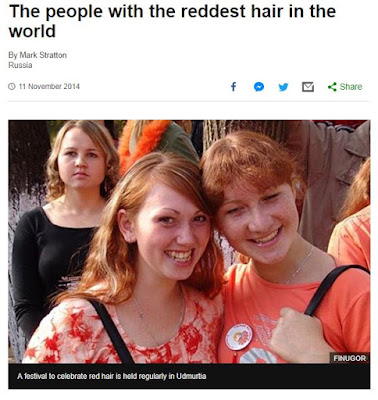 The red hair is quite striking, and it's very curious that people who would not look out of place in Scotland or Ireland are found native to lands so far away. It's something I've been looking into, but so far to little avail.

Interestingly, Udmurt is said to mean "meadow people" - quite a beautiful and idyllic name. So it's hard not to imagine some idyllic agrarian promised land for redheads. No doubt the reality is somewhat different though. The redheads in Udmurtia definitely offer a fascinating window into the largely unknown history of red hair however, and serve as an interesting "clue" for further speculation into what that history actually is.

The only real thing I've managed to dig up so far is the following paragraph from a book titled The Finno-Ugric Republics and the Russian State by Rein Taagepera;

Of course, most Udmurts, like most Irish, do not have red hair. The red can be very marked or just a tinge in dark or blond hair, visible under some lights, invisible under others. There is no explanation for this trait; it is certainly not shared by the Komis whose language is close to Udmurt. The nation is proud of its shundy-pi (sons of the sun): Udmurts say, 'A person with red hair is the sun's child', and 'A redheaded person is closest to the gods. The gods love them.'

It's also interesting that a link is made between red hair and the sun, as this is a theme we've mentioned on here before. I guess it's quite a natural link to make in a way. Hopefully more information will come to light regarding the red-haired Udmurts over the coming months and years.