I've just finished reading a book called 'When Scotland Was Jewish' by Elizabeth Caldwell Hirschman and Donald N. Yates. It mentions that the name Affleck means "with spots/freckles". Not massively interesting, but I thought I'd note it.
Posted by Neil at 10:07 PM No comments:

Red and Red Hair in the Megalithic Empire

Came across a brief mention of red hair in 'The Megalithic Empire.' An excellent book that I'll be reviewing shortly on my other blog.


"Red dye, Kermes (Hermes) red or Carmine red, was made from the kermes beetle, a parasite of the holly oak (= kermes oak). Carmenta was a Roman goddess who had the remarkable, but in Megalithia all too common, dual role of being the patron saint of midwives and inventor of the Latin alphabet. There seems to have always been a widespread prejudice against red-haired wet nurses, underlining an association between carmine and witchery (as in charm and karma)."

I'm currently reading Fomenko's 'Chronology IV' (history revisionism at its finest). In it he mentions that the famed ruler Timur, historically known as Tamerlane, had red hair. He quotes an eminent scientist named M. Gerasimov who examined the supposed corpse of Timur. He stated;


"Timur's hair is thick and long, reddish-grey in colour, dark brown and red being the dominating shades...Timur's beard had been short and thick. It's hairs are rough, almost straight, and rather thick; their colour is red, with a great deal of grey."

Apparently historical sources describe Timur as red-haired as well, but this had been thought incorrect as Timur is generally believed to have been Oriental/Mongolian. Incidentally Fomenko contests this, believing him to be European.

Now I'm going to read Christopher Marlowe's play 'Tamburlaine the Great' to see if red hair pops up in that. I've been meaning to read it for a while now but have never gotten round to it. This has inspired me.
Posted by Neil at 7:42 PM 1 comment:

Red Hair Could Make You More Susceptible To Illness

Spanish scientists have just published research linking red hair with increased cell damage. They carried out a study on wild boars and found that those with reddish coats had more cell damage than those with duller coats. The research also suggested that grey hair could be a sign of good health.


The study suggests that the production of red pigment is to blame. Pheomelanins, which produce red and 'rich chestnut' hues, require a chemical called glutathione (GSH). This chemical is also an antioxidant. The suggestion is that producing red pigment uses up the GSH leaving less to work their antioxidant magic.

Yet more bad press for redheads!
Posted by Neil at 9:38 PM No comments:

Came across a few mentions of red hair on Wikipedia's page about British Israelism;


"Apocryphal historical texts are also often cited which describe Jesus as golden or red haired, these include the Description of Jesus by Publius Lentulus which describes the hair of Jesus as chestnut (reddish-brown) and his eyes bright blue[.]"

Following my previous post I should also mention that the Redhead book has its own website - here. And on the website its own red hair blog too - http://iancookauthor.co.uk/#/blog/4557830424.

The blog mentions that the artist Paul Gauguin featured red-haired natives in his Tahiti paintings. Something I wasn’t aware of until I read it. There’s a good picture of one of the paintings on the blog. Along with some striking images of red-haired mummies.

[No doubt I’ll be keeping an eye on the blog, as there’ll probably be plenty of stuff I can thieve, magpie-like, to fuel my own nefarious interests!]
Posted by Neil at 4:11 PM No comments:

I’ve just finished reading a book called Redhead by Ian Cook. As the title suggests the focus is red hair and people with it. It was really good. Very esoteric and full of information about red hair. A lot of it I wasn’t aware of.

The book’s a fictional thriller and begins with a journalistic investigation into the ritual murder of redheads that’s started taking place around the globe. Redheaded journalist Rebecca Burns is both the investigator and the focal point of these strange happenings and her journey takes her to North Africa, Easter Island and eventually to the Neolithic monuments of Scotland.

The book was excellent and I fully recommend it. Especially to anyone interested in red hair.

Given the supernatural, historic (I should have mentioned earlier that the book implicates Cleopatra, Seth and Horus, and ancient Egypt in the redhead story) and scientific themes of the book I’ll be interested to see how it’s received. I mentioned in one of my previous posts about the modern mythologizing of red hair. I can’t help but feel that this is continuing apace and this book seems to have caught the zeitgeist pretty well. In fact, it might end up being a case of life mirroring art (hopefully without the human sacrifice bit though!). I hope this book ends up being widely read. It’ll be fascinating to see if people start borrowing from it and blurring the line between life and fiction - a la the whole Da Vinci Code/Mary Magdalene thing. 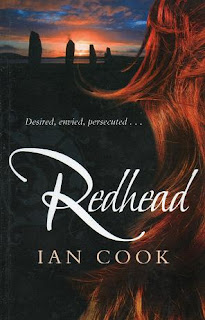 I came across the word ‘erythrism’ for the first time recently. It means;


“unusual redness of plumage or hair, often with a ruddy complexion in humans”

It derives from the Greek word eruthros meaning ‘red.’

When checking the dictionary I also came across the Erythraeans;


“of ancient Erythrae: relating or belonging to the ancient city of Erythrae in Turkey, or, formerly, to the group of Hamito-Semitic languages spoken in the region of Erythrae”

I don’t suppose these guys were red-haired, but it might be worth checking out. The ‘red’ in the name probably relates to the land or something I would imagine, but you never know. Worth bearing in mind for the future maybe.
Posted by Neil at 11:10 AM No comments:

Came across a brief mention of red hair in the Hypnerotomachia Poliphili;


“Some nymphs had reddish hair that was splendidly interwoven and bound around the head with a matching garland of spring flowers.”

Not particularly revealing, but I thought I might as well mention it.
Posted by Neil at 11:09 AM No comments:

A Miscellany of Red-Haired Historical Figures

The other week I came across a website that listed historical figures along with contemporary descriptions of their physical appearance. A few of the descriptions mentioned red hair. I’ll catalogue them here.

Alexander II, King of Scots (1198-1249)
“[King John] taunted King Alexander, and because he was red-headed, sent word to him, saying, 'so shall we hunt the red fox-cub from his lairs.'“
From the Chronica Majora of Matthew Paris

Richard I, King of England (1157-1199)
“He was tall, of elegant build; the colour of his hair was between red and gold; his limbs were supple and straight. He had long arms suited to wielding a sword. His long legs matched the rest of his body.”
From the Itinerarium peregrinorum et gesta regis Ricardi by Richard de Templo

Fernando I, King of Aragon (1380-1416)
“He was tall, a little more than average, and thin and ruddy, and his cheeks had a few freckles…”
From Cronica de Juan II by Alvar Garcia de Santa Maria

Frederick I Barbarossa, Holy Roman Emperor (1122-1190)
“He was indeed an illustrious man, of stature moderately tall, of red hair and beard; his head was partly turning grey, his eyelids were prominent, and his eyes sparking; his cheeks short and wide, his breast and shoulders broad…”
From the Chronica of Geoffrey de Vinsauf

Frederick II, Holy Roman Emperor and king of Sicily (1194-1250)
"The Emperor was covered with red hair, was bald and myopic. Had he been a slave, he would not have fetched 200 dirhams at market."
From the Muntazam by Sibt Ibn al-Jawzi

Ismail I, Shah of Persia (1487-1524)
“His hair is reddish; he wears only moustachios, and uses his left hand instead of his right. He is as brave as a gamecock, and stronger than any of his lords…”
From Giovanni Angiolello
Posted by Neil at 10:10 PM No comments:

Albrecht Durer was a Redhead

I’ve just found out that the painter Albrecht Durer was a redhead. His gingery red hair can be seen in his earliest self-portrait, painted at the age of 22. Durer is generally seen as the premier artist of the Northern Renaissance. He was born 1471 and died 1528, aged 56.
Posted by Neil at 10:09 PM No comments:

Red Hair of the Dragon Line

I recently came across this webpage.
http://herebedragons.weebly.com/family-tree.html

The page is titled ‘Dragon Dynasties Family Tree’ and contains some strange and esoteric opinions regarding red hair. It's a good example of what I would call the modern mythologizing of red hair. I’ll quote the salient bits.


“The House of Vere is the first royal house of Anjou and said to be of pure Elvin Royal Dragon Blood.....who came into conflict with early Christian church officials (dont even get me started on all this stuff: it is tied up in a lot of mythology : I am only reporting what I find: those of you who wish to read more can do so in:

The Dragon Legacy: The Secret of an Ancient Bloodline by Nicholas de Vere..........whereby the De Veres are considered the Grail bloodline.........supposedly a super human red haired and green eyed race of men (gosh my family has a ton of green eyes: lol)”

Then further down the page;


“Now here is the kicker: according to E.A. Wallis Budge, “Animals with red or reddish brown hair or skins were, and even red haired men were supposed to be especially under the influence of Set.” As is well known to anyone reading this publication, the Merovingians were notorious for their red hair and it was believed that this is where they received all of their “powers.””

Consequently red hair, white skin and green eyes are the racial colouring of the Elven God Kings. This colouring, determined by the possession of the MC1R genes, is not human in the accepted sense; it is Neanderthal and, just as biblical and Sumerian histories tell us of the hybridisation of Man and the Gods, so Man and Neanderthal interbred.”