Did Genghis Khan and his son Ögedei have red hair?

Genghis Khan (c. 1158 – August 18, 1227), born Temüjin, was the founder and first Great Khan (Emperor) of the Mongol Empire, which became the largest contiguous empire in history after his death. After founding the Empire and being proclaimed Genghis Khan (an honorary title possibly derived from the Turkic "tengiz" — sea, meaning "the oceanic, universal ruler"), he launched the Mongol invasions that conquered most of Eurasia, reaching as far west as Poland in Europe and the Levant in the Middle East.

His descendants extended the Mongol Empire across most of Eurasia by conquering or creating vassal states in all of modern-day China, Korea, the Caucasus, Central Asia, and substantial portions of Eastern Europe and Southwest Asia.

Present-day Mongolians regard him as the founding father of Mongolia. He is also credited with bringing the Silk Road under one cohesive political environment. This brought relatively easy communication and trade between Northeast Asia, Muslim Southwest Asia, and Christian Europe, expanding the cultural horizons of all three areas. 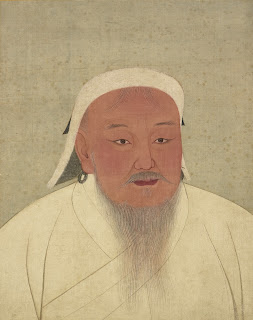 Genghis Khan never allowed his image to be portrayed in paintings or sculptures. The only individuals to have recorded Genghis Khan's physical appearance during his lifetime were the Persian chronicler Minhaj al-Siraj Juzjani and Chinese diplomat Zhao Hong, but they don't mention red hair.

Red hair is mentioned by the Persian historian Rashid-al-Din, who wrote at the beginning of the 14th. He states that most Borjigin ancestors of Genghis Khan were "tall, long-bearded, red-haired, and bluish green-eyed," features which Genghis Khan himself had. In the Georgian Chronicles, in a passage written in the 14th century, Genghis Khan is similarly described as a large, good-looking man, with red hair. However, according to some historians, Rashid al-Din's text of red hair referred to ruddy skin complexion, and that Genghis Khan was of ruddy complexion like most of his children , except for Kublai Khan who was swarthy. (Source)

Here's a portrait of Genghis Khan's son and successor Ögedei (1186 - 1241), where he sports a reddish moustache and goatee. 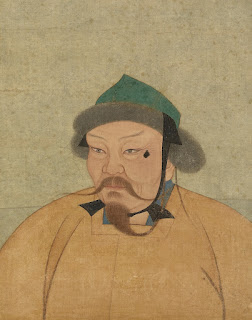 However, the portrait was made after his death, during the Yuan dinasty. So, unfortunately, we don't know whether he and his father really had red hair or not, although it's interesting that such an unusual hair colour has been somewhat associated to them. It's also worth pointing out that today only a tiny minority of people belonging to the Mongolian race have facial hair.


What we know, though, is that red hair is not uncommon in Asia. For example, red hair can be found among some peoples of Afghan, Arab, Iranian, Mongolian, Turkic, Miao and Hmong descent. Ancient human remains with red and reddish-brown hair have been discovered in various parts of Asia, including the Tarim mummies of Xinjiang, China.

A little post today noting a piece of writing concerning the red hair of Judas. It's called simply Judas's Red Hair and is by Paull Franklin Baum. It was published in 1922. 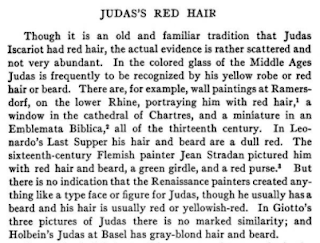 The work can be found in full here: https://archive.org/details/jstor-27702658/page/n1/mode/2up
It contains many little notes and references. It's quite short too, so it's well worth reading the full thing if you're interested in the topic.
There are a couple of things I thought were worth making note of.
Firstly he states that:

Which is interesting.
Then later in the text he notes that:

Abraham a Sancta Clara submits that the general tradition sprang from a popular etymology of the name Iscariot - "Ist gar roth."

Abraham a Sancta Clara was a German Augustinian monk who lived in the 17th century. "Ist gar roth" in German means "is even red" according to Google Translate. Not speaking German I can't be sure if this is correct. I would suspect "is very red" or "is really red" would be a better translation. Either way though the suggestion is that the name Iscariot means "is red".
This sounds a little silly at first. However, looking at the name again words like carrot and garrotte spring to mind. Garrotte meaning to strangle someone of course, which could come with connotations of bloody red. Judas died by hanging too it may be recalled.
"Carrots" is a common nickname for redheads, though originally carrots weren't always orange. Supposedly they were originally white, with the orange variety being cultivated in the 16th or 17th century. So the relation to red hair may not go back too far.
Oranges and orange pumpkins became a little recurring theme on this blog a few years back. Perhaps it's time the humble carrot joined the gang :)
In fact, I've just read this on Wikipedia:

There are many claims that Dutch growers created orange carrots in the 17th century to honor the Dutch flag at the time and William of Orange.

So we're on familiar ground !
Though the same Wikipedia page also notes that the 11th century Jewish scholar Simeon Seth mentioned carrots that were red and yellow. As did a 12th century Arab writer. So perhaps the relation of the carrot to red does indeed go back further.
Hmm..
Posted by Neil at 12:13 AM No comments:

Three Ounces Of The Red-Haired Wench ..

This is another little piece of information I found courtesy of the Jacky Harvey Colliss book Red. In it she references an article concerning additions made to Shakespeare's Macbeth by the playwright Thomas Middleton.
That article can be found here, and is titled Red Hair as a Sign of Jewry in Middleton's Additions to Macbeth.
Middleton added a song to Macbeth called "Black Spirits", which contains a list of ingredients to be added to a witch's brew. Amongst the usual ghoulish ingredients is listed "three ounces of the red-haired wench".
The song also appears in Middleton's play The Witch. In that it's stated that the "three ounces" is from a red-haired girl that had been murdered the previous night.

HECATE: Into the vessel;
And fetch three ounces of the red-hair'd girl
I kill'd last midnight.

I haven't read the full play (I'll have to add that to my to do list), but my immediate thought is that it's three ounces of fat; and that it's in reference to the idea that the fat of redheads was used in the making of poison. [We've noted some of these strange notions before on this blog. It was said that the blood from a red-haired man was needed to turn copper into gold, and that the urine from red-haired boys was utilised in the making of both swords and stained glass windows o_O ].

Returning to the above referenced article though I'll quote the following passage.

"[A]ccoring to Elizabethan theater scholars, actors playing Jewish roles wore red wigs as a visual shorthand of Jewry and its supposed cultural and religious associations with Satanic practice. Red hair is, therefore, an appropriate ingredient in a witches' cauldron. Moreover, seeing red hair as essentially "Jewish" would fit in well with the accepted reading that red hair was associated with lechery, one of the Seven Deadly Sins associated with Jews."

These overlapping themes are always odd and interesting. Hopefully we'll find more as we dig further.

Some beautiful art from the hand of the French impressionist Edgar Degas today.
Firstly this work titled La Coiffure. 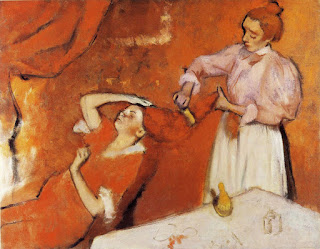 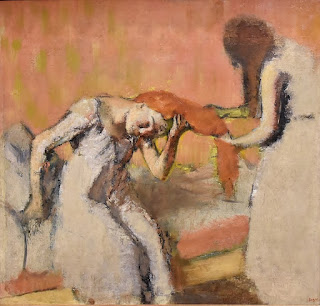 (La Coiffure c. 1893)
Next up we have a rather elegant image called Ballet Rehearsal; that features a few redheads dotted about. 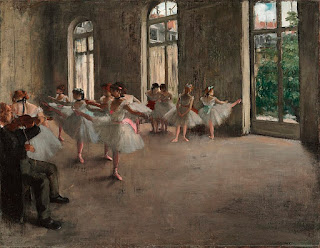 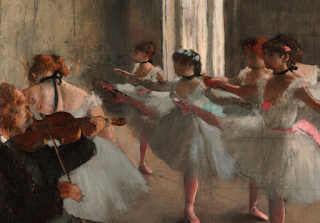 (Ballet Rehearsal - detail)
We also have this slightly odder image titled The Singer with the Glove. 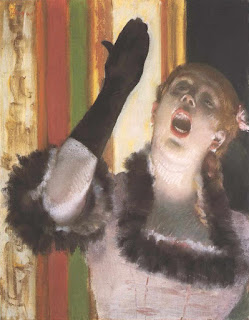 (The Singer with the Glove, 1878)
Finally, we have some nudes: The Tub; Woman in a Tub; and After the Bath, Woman Drying her Nape. 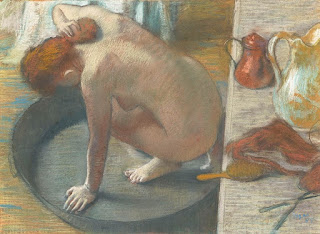 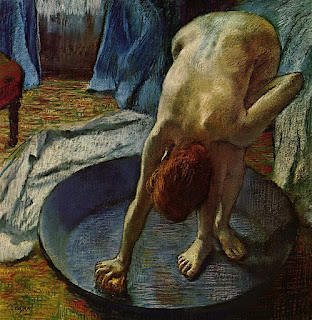 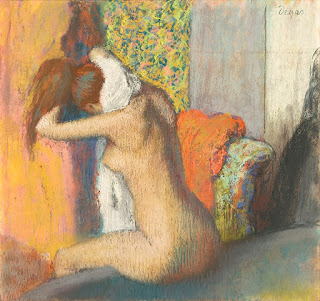 I was made aware of the following painting recently. It's from the hand of the noted occultist Aleister Crowley. It's a somewhat disturbing image, and depicts the end of the age of Christianity. In it 'Christianity' is depicted hung from a tree with bright orange hair. 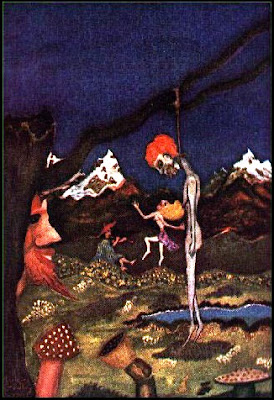 "The picture is symbolical of the New Aeon. From the blasted stump of dogma, the poison oak of "original sin," is hanged the hag with dyed and bloody hair, Christianity"

Recently Read: Red - A Natural History of the Redhead 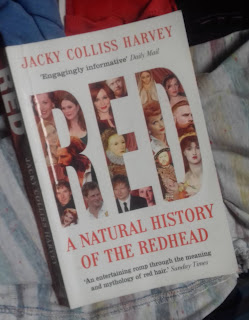 It was a great read, and was packed full of information about red hair. I highly recommend it.
As ever with these book reviews my main instinct is always to thieve the little facts and quotes that stand out; so I can share them here. As this is a book about red hair there's quite a lot. So I don't want to be too rude and just copy everything. So I'll have to restrict myself to a few of my favourites.
Firstly, it was interesting to find that Quasimodo - the famed Hunchback of Notre Dame - was red-haired:

I also really liked this quote about red hair, from the mother of Oscar Wilde no less:

Red hair is supposed to have the most malign influence, and has even passed into a proverb-"Let not the eye of a red-haired woman rest upon you."

Another thing that really caught my eye was this following passage from the novel To Kill A Mockingbird:

"Half white, half colored. You've seen 'em, Scout. You know that red kinky-headed one that delivers for the drugstore. He's half white. They're real sad."

Colliss Harvey relates this "red kinky-headed"-ness to the phrase "beat you like a redheaded stepchild", speculating that originally the stepchild referred to denoted a child of mixed race. This is interesting as we've speculated on here recently about the possibility that red hair is the product of racial interaction; or more specifically: diverse gene pools. (For the latest iteration see here: Melting Pots - Part III - Eumelanin and Pheomelanin).

The story in To Kill A Mockingbird takes place in the first half of the 20th century, when attitudes to race were quite different. So it might be worth looking at other writings from the time to see if red hair pops up in other discussions about mixed race children.

Finally, another little nugget I liked was the following one. Apparently in medieval Germany one term for freckles was "Judasdreck" - which translates as "Judas-shit". We've noted the many quotes and depictions that portray Judas as red-haired on here before. Now we have a specific reference to the freckles as well. I think I'll stick with the term "sun kisses" though :)