She was born in Flamschen, a farming community at Coesfeld (Westphalia, Germany), and died at age 49 in Dülmen, where she had been a nun, and later become bedridden. Emmerich experienced visions on the life and passion of Jesus Christ, reputed to be revealed to her by the Blessed Virgin Mary under religious ecstasy.

During her bedridden years, a number of well-known figures were inspired to visit her. The poet Clemens Brentano interviewed her at length and wrote two books based on his notes of her visions. The authenticity of Brentano's writings has been questioned and critics have characterized the books as "conscious elaborations by a poet".

Emmerich was beatified on 3 October 2004, by Pope John Paul II.

Visions contained in The Life of The Blessed Virgin Mary were used during the discovery of the House of the Virgin Mary, the Blessed Virgin's supposed home before her Assumption, located on a hill near Ephesus, as described in the book Mary's House (neither Brentano nor Emmerich had ever been to Ephesus, and indeed the city had not yet been excavated).

In 1881 a French priest, the Abbé Julien Gouyet, used Emmerich's book to search for the house in Ephesus and found it based on the descriptions. The Holy See has taken no official position on the authenticity of the location yet, but in 1951 Pope Pius XII initially declared the house a Holy Place.

In 2003 actor Mel Gibson used Brentano's book The Dolorous Passion as a key source for his movie The Passion of the Christ. 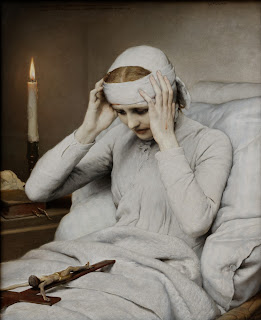 Many of her works are available online for free, like this one, where we found several references to red hair:

- Those first human beings [Adam, Eve and their children] had beautiful skin of a yellowish tinge, which shone like silk, and their hair was reddish-yellow like gold.

- When I saw him in Egypt, Job was a large, powerful man of agreeable appearance; he had a yellowish-brown complexion and reddish hair.

- (Moses) His complexion was brown, bright and ruddy, his hair inclined to red.

- (John the Baptist) His face was thin and haggard; his expression, grave and austere; his auburn hair in curls over his head, and his beard short.

Jesus' hair is described as "golden".