If you've just read the last article you may now be aware that there's a Facebook page to catalogue the multitude of famous redheads from throughout history. It can be reached via the following link; 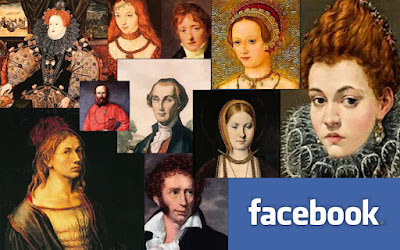 The Past Prejudice Against Red Hair: What's Its Origin?

[The following article is the work Emanuela, who is posting her thoughts on the possible origin of the seemingly universal prejudice against red hair.]

When I first became interested in red hair, I thought the origin of past prejudice against it was its rarity. At least, that’s what I read on websites and in books on the subject. Later on, however, I began questioning this idea. It’s true, red hair is rare, but not so rare.

For example, I live in a small town (about 5000 inhabitants), in central Italy (in Italy, only a rough 0,6% of the population has red hair). Here in my town there are at least 10/12 redheads I know of. This means that, if you are lucky, you can meet one or two of us while strolling down the main road or going to the market. I remember that, when I was younger and used to go out for a walk with my friends, I would often meet a red-haired girl who looked very much like me (although she was taller). And when I was a child, there was another red-haired little girl not far from my granny’s house. And this is Italy. In countries like the UK and Ireland meeting a redhead should be quite common, today like yesterday. If you see a certain thing with a certain regularity, this thing is not rare, it's just unusual.

Besides, why should something rare, or uncommon, or unusual be considered evil? In Italy, for example, green and blue eyes too are unusual, but I’m not aware of past prejudice against them. However, if you read these proverbs;

Or if you read the beginning of the Italian short story Rosso Malpelo, you clearly see that red-haired people where considered almost the epitome of evil.

We have this idea that, in the past, people were so stupid, ignorant and narrow-minded that they hated and mistrusted everything out of the ordinary. I don’t believe that and I don’t have this low opinion of past generations. On the contrary, I believe that behind our actions there’s always a reason, now as well as in the past, although often, with the passage of the time, reasons are forgotten.

One day, I was reflecting on my ever-growing list of famous redheads in history. Currently there are a little bit more than 300 names (we are posting all of them on our Facebook page https://www.facebook.com/FamousRedheads/ ), and most of them belong to two categories: sovereigns and aristocrats. They come not only from the UK and northern Europe, but also from southern Europe and from Muslim rulers. I also noticed that often, if the sovereign didn't have red hair, someone in his/her family (a sibling or a parent) had it. That’s when an idea dawned on me.

In the past (for reasons we still have to investigate), red hair was particularly common among royals and aristocrats, and that’s the reason why people mistrusted it: because they identified it with people of power, and people of power have always been perceived as oppressors.

This could also be the reason why, on the contrary, more educated people loved red hair. Painters, for example, usually worked for rich patrons, and painters have always represented red hair in their works, long before the Pre-Raphaelites.

Then, over the centuries, red hair began to spread among common people as well, who would keep seeing them as something negative.
Posted by Neil at 8:45 PM No comments: