I came across this painting last night; 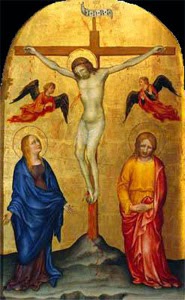 It's by an Italian painter called Gentile da Fabriano and dates to the early 15th century. The image is said to depict Jesus, the Virgin Mary and John the Evangelist. All three characters look pretty ginger to me, however I suppose the colouring could be said to be more blonde than red. It's difficult to tell with these old paintings - the decay of the image and the lighting conditions when the photograph was taken no doubt having some influence. I think I'll plump for strawberry-blonde.
Posted by Neil at 10:32 AM No comments:

I recently received an email informing me about an event taking place in the city of Troy, New York on October 1st. To celebrate an annual gathering of redheads called Night of the Walking Red the Mayor of the city has proclaimed that the city is to be known as "Ginger City, USA" for the day.

More details about the event can be found here:
http://leagueofextraordinaryredheads.com/for-media/mayor-proclaims-troy-ny-is-ginger-city-usa-oct-1-2014/ 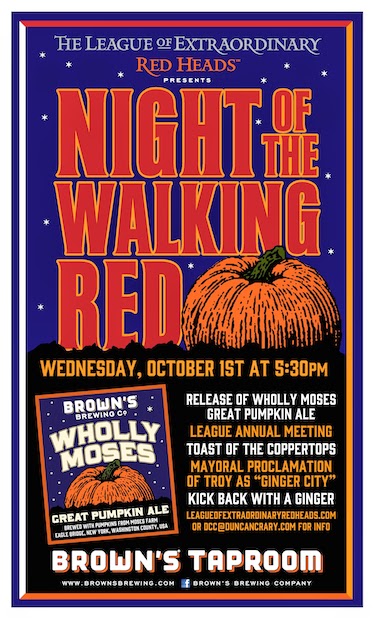 The event is organised by The League of Extraordinary Red Heads. In the above linked-to article they're described thusly;

"Though the highly visible group assembles suddenly in public spaces, not much is known of the inner workings or its true purpose. It purports to be “a social get-together for those with reddish hair and those who love them,” but some suspect it may be a secret society with plans for world domination."

It all seems pretty cool actually.

I really like the way they've used the pumpkin theme. In earlier articles I've speculated that in times gone by the pumpkin was a symbol for redheads. Linking it to both Halloween and the Protestant Reformation. Maybe these guys are tapping into a similar vein. The choice of October 1st seems pretty fitting with that in mind too - the month of Halloween.

Redheads should definitely hijack Halloween :D
Posted by Neil at 7:34 PM No comments:

Lots of Stuff Today ..Where to Start?

Earlier today I was reading Anatoly Fomenko's History: Fiction or Science? Chronology 2 when I came across this;


Furthermore, the mediaeval emperor Otho III ("the Red"), who died in the alleged year 1002, can be identified as the "ancient" emperor Constance I Chlorus, the latter being the word for "ginger". We thus get a correspondence of names; both these emperors, in turn, merge into the single figure of the "ancient" Julius Caesar from the Second Empire, qv in Chapter 1 of Chron2. It would be interesting to find out whether or not Julius Caesar had ginger hair.

I should explain this quote by stating that the books main theme is that the historical record is wrong and that many stories we know from history are simply retellings of other historical narratives, just misinterpreted or told in a different language or from a different perspective. For example, Fomenko states that the Trojan War is just a retelling of the Gothic War, moved back into "ancient" history by misguided historians. It's contentious but interesting stuff. However, for the purpose of this blog I'm more concerned with the fact that he's mentioned people who may have had red hair.

I searched out Otho/Otto III ("the Red"), but came across some confusion. According to Wikipedia it's actually Otto II that was named "the Red" or "Rufus". However, the picture of Otho III on Wiki, taken from the Gospels of Otto III (10th or 11th Century), shows him with bold red hair. 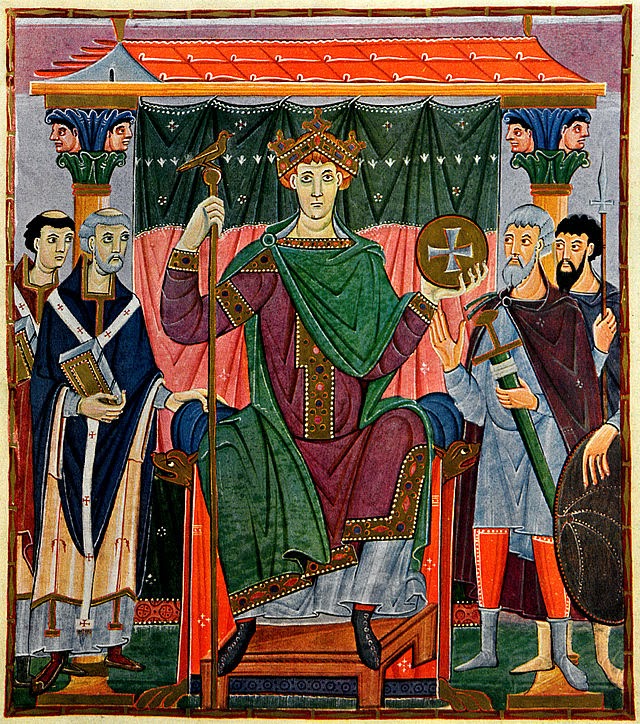 Kind of a result I'd say :D

After that I searched out Constance I Chlorus aka Constantius Chlorus. I couldn't find any mention of his hair colour. However, when I looked up the meaning of Chlorus I found it was the Latin for pale, and not ginger. Although I guess pale could be interpreted that way.

Anyway, that got me thinking about the term Choleric - one of the Four Temperaments of Classical/Medieval medical thinking (Melancholic, Phlegmatic, Sanguine and Choleric). As it turned out I found that Choleric was associated with red hair. It reminds me of my other post on here about the four suits/races on Tarot and playing cards.

That finally brought me to a book on Google Books that mentions the Choleric/red hair link, along with some other interesting things about red and red hair.
The Epic Hero - Dean A. Miller


To the medieval mind the red-haired man was an object of suspicion (or even, according to Joel Grisward, a "disgrace"), not just because the red-headed man was invariably considered choleric, quarrelsome, or aggressive, but because he was likely to be "méchant" or "felon."

He also mentions this about Achilles;


The "red" warrior's persona may break out of any modifying or controlling ethos, not just from disequilibrating anger but out of its own sense of distinct, uncontrolled individuality. When Akhilleus, in his youth, is briefly disguised as a girl he is called Pyrrha, "red head." It is this same "red" essence that underlies his brittle savagery in the Iliad.

He also brings to our attention this guy;


Mstislav, a red-haired (and red-faced and intemperate) Kievan warrior-prince in a Slavic source[.].

A decent days work. Oh, and regarding my last post I did starting watching Defiance. It's pretty good actually. Season 2 starts tonight (:
Posted by Neil at 3:17 PM No comments:

Was just flicking through the channels when I came across this image on TV. 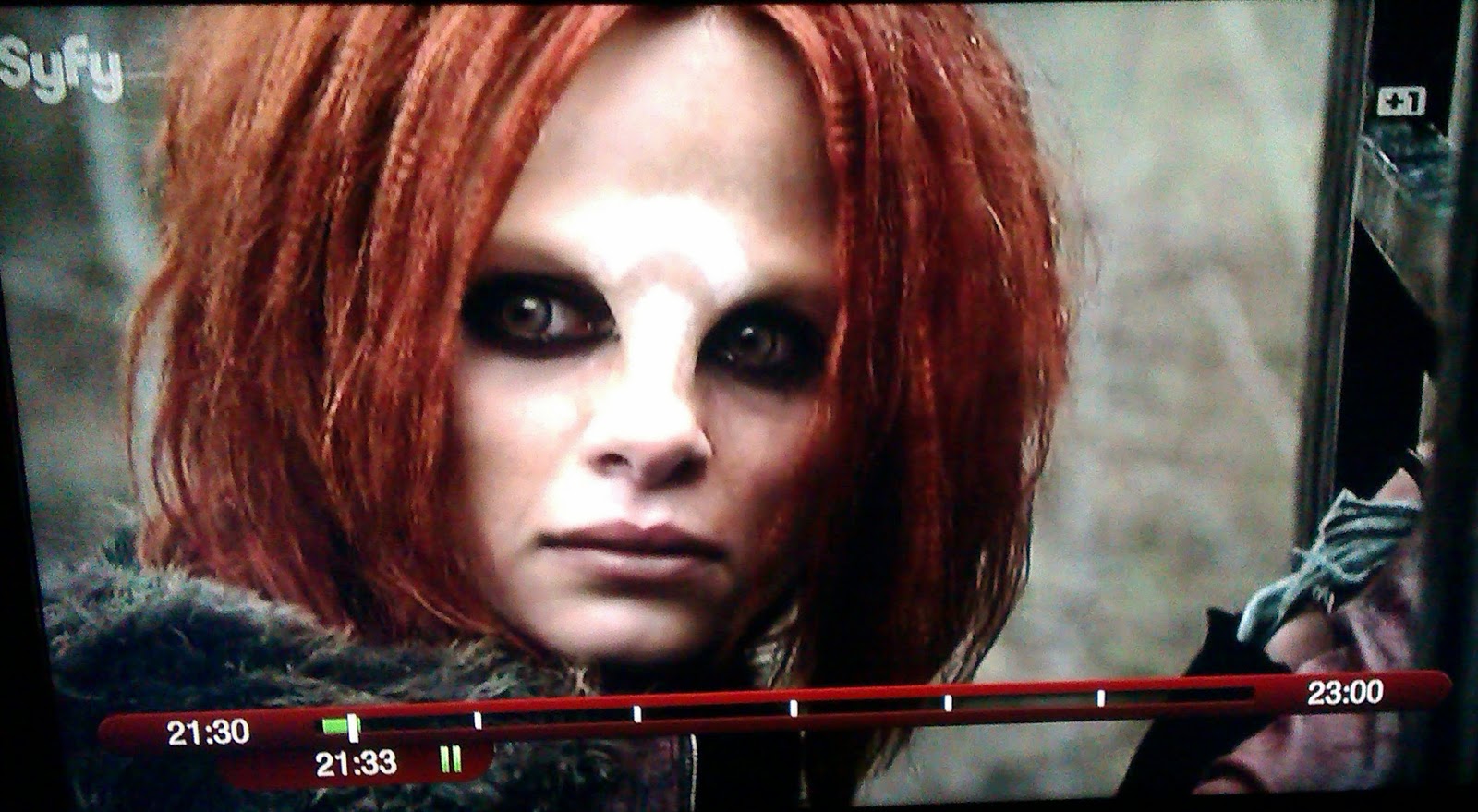 Quite striking. It reminded me how alien red hair sometimes seems. She looks quite hot actually. The show's a Sci-Fi series called Defiance. I don't know how good or popular it is - I tend to be a bit behind the curve when it comes to this sort of thing. I watched the last 20 minutes or so and saw enough to arouse my curiosity, so I've Tivoed the next few episodes. Luckily what I caught was a repeat of the pilot. Hopefully it'll be worth watching.

The character's called Irisa by the way. She stood out so much when I was flicking through the channels. Maybe the image pressed some primordial button in me. I guess you could say her misshapen alien brow ridge looks almost Neanderthal. I might have to adopt her as my new pin-up.