I've continued to notice more redheads in adverts since my last post on the topic. They haven't been quite as frequent, but have still been more than noticeable.

First up the following advert from the mobile phone company O2 starring a red-haired girl.


Then this one from the building society Nationwide which features a red-haired little boy with bright red hair.

And finally the following advert for Seriously Spreadable cheese with another red-haired female star.

I also noticed a few token redheads in this much televised McDonald's advert too.

It's difficult to know if red hair is genuinely fashionable at the moment or if it just seems to be fashionable when juxtaposed against the days when red hair was strictly prohibited on British TV. Maybe it's just getting the equal airing that it always should have got? Maybe that's what I'm noticing.

Incidentally, I also noticed this billboard advertisement featuring a redhead in my home town when out and about. It's advertising orange-flavoured Volvic water with the tag line "Orange and Proud".

(My apologies for the quality of the picture, but you get the idea.) 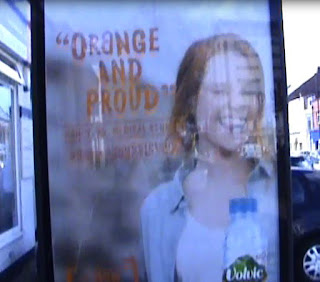 It appears the advertisement shown above was not shown in Scotland or Ireland for fear of causing offence, as it was feared the slogan "Orange and Proud" could be deemed to relate to the Orange Order lol. Quite amusing ..and slightly interesting, especially given how we've mentioned the possible links between red hair and Protestantism on here before. Maybe there was more truth to this idea than we had realised.

(Also notice the one-eye symbolism in the advert!)

First post in a good while. I'll start with something that Emanuela brought to my attention. Namely that the famed Grand Duchess Anastasia Nikolaevna of Russia was possibly a redhead. Anastasia, of course, was part of the Romanov royal family that was murdered by the Bolsheviks following the Russian Revolution. Many myths have grew up around the figure of Anastasia based upon the idea that she may have escaped the fate the rest of her family suffered and somehow managed to survive undercover. 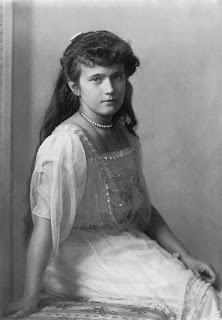 
[Y]oung Anastasia grew into a vivacious and energetic child, described as short and inclined to be chubby, with blue eyes and strawberry-blonde hair.

The source given for the information is the book Memories of the Russian Court by Anna Vyrubova, published in the 1920s. However, scanning through an online version of it I could only find reference to her hair being "blond".


Tall she was, and delicately, beautifully shaped, with exquisitely white neck and shoulders. Her abundant hair, red gold, was so long that she could easily sit upon it when it was unbound. Her complexion was clear and as rosy as a little child's. The Empress had large eyes, deep gray and very lustrous.

At the moment Russia holds a slight fascination for me. I'm beginning to think it's the most mysterious country on Earth. Then again it may be just another phase of interest I'm going through.
Posted by Neil at 11:32 PM No comments: