Some Belle Époque And Other Red-Haired Art

Okay, cool art time. First up some pieces from the French painter and lithographer Jules Chéret. These images are in a style known as Belle Époque - the "Beautiful Era". 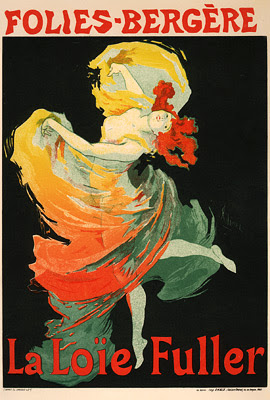 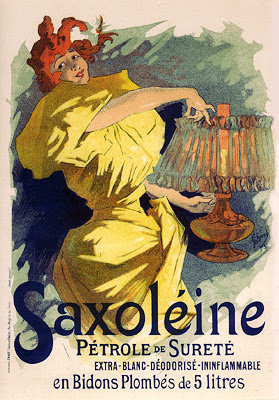 (Saxoléine, Pétrole de sureté - which
I'm guessing is an advert for lamp oil) 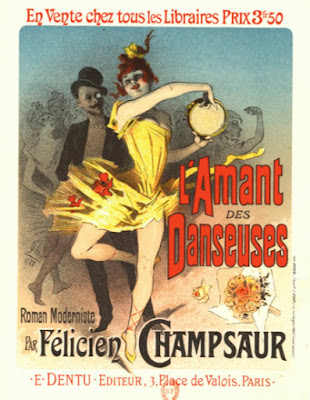 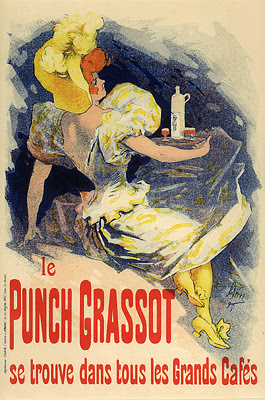 (An advertisement for drinks I'm guessing
..can be found in all great cafes)

This next one, which is quite stylish, and I guess more in the Art Nouveau style, is by the artist Koloman Moser. 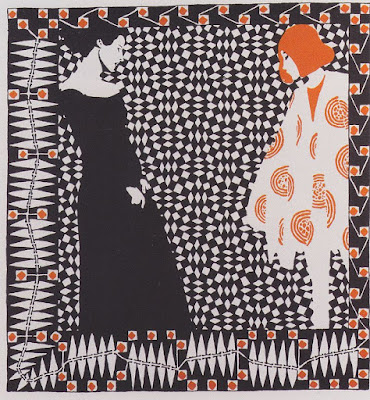 The following image depicts the French cabaret singer and actress Yvette Guilbert, and is by the Swiss-born artist Théophile Steinlen.

There are several other images that also show her with red hair, however it seems that it was a product of dyeing.


"She accentuated her physical features by whitening her face, dying her hair a striking shade of red, and wearing shoulder-length black gloves."

Though whether she dyed it to further redden it or to change it completely I've not yet been able to discover. 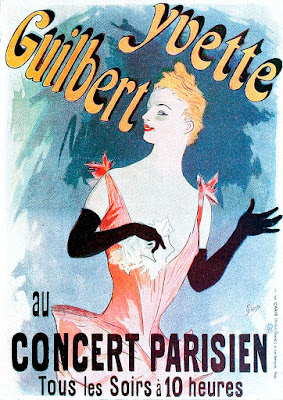 (This one comes courtesy of the above
mentioned Jules Chéret) 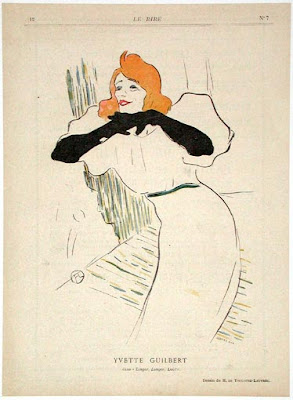 (..and this one of her
is by Toulouse-Lautrec)

I also came across this striking Toulouse-Lautrec image featuring another red-haired woman. 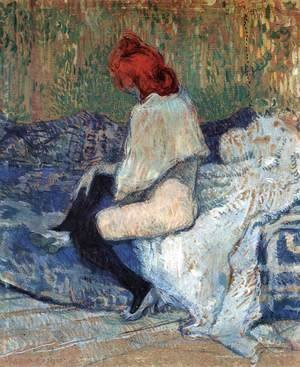 (Red-Haired Woman on a Sofa
- Toulouse-Lautrec)

I've finally finished reading the book The Naming of Russia by Håkon Stang. In it there was a great passage quoted from the works of Isidore of Seville, the 7th century scholar. It listed some of the noted characteristics of various tribes and peoples. Amongst which it stated that the Goths had a "dragon's blood" colouring.


"Now several peoples lay claim as it were to their proper insignia not only in the clothing but also in the body and otherwise. Thus we see the [forelock] tufts of the Germanics, the braided hair-whip and the dragon's blood colour of the Goths, the scars of the Brittons. The Jews circumcise the prepuce; the Arabs perforate the ears; the Getae with their heads uncovered have their hair golden yellow; the Albani have white hair that glistens."

The passage is of course a translation. In the notes the original Latin is given as well though. Granos et cinnibari Gotorum for the part specifically relating to the Goths. Gotorum designating Goths. Granos I think meaning grains - i.e. braids, and cinnibari being the red resin dragon's blood, from the dragon's blood tree (Dracaena cinnabari). A resin used as a dye and a medicine.

It should also perhaps be noted that dragon's blood was often confused with cinnabar in Roman times, a red poisonous mineral. Likewise used for its colouring. So the Latin term could designate either.

Given that dragon's blood was used as a dye it's difficult to tell if the passage is stating that the hair was dyed this colour or if it was naturally this colour red. Either way it's a fascinating passage. With quite a mythical, poetic flavour to it. 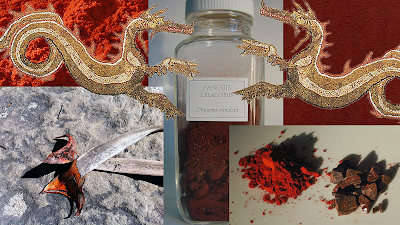 The Naming of Russia also contained many other interesting mentions of red hair which I'll relate below.

Firstly, the name Russia itself is often said to betoken red hair. We've mentioned some of the similar words on here before, such as rose, russet, rusty, etc. Thanks to the book I also learnt that the Hebrew word rosh means head or leader. A slightly similar theme, and something perhaps worth bearing in mind.

The Red Jews of eastern Europe are often mentioned in relation to red hair. Sometimes equated with the Turkic Khazars. Arab writers often refer to these people as red-haired and blue-eyed. Another Arabic example, though this time relating directly to Russia, is found in the book. Coming from the Persian geographer Amīn Rāzī;

"The Rüs: This is an enormous mass of people. Their nationality in its entirety has red hair, tall stature, and white bodies. (...)"

Interestingly the book also references accounts that seem to place a red-haired nation somewhere near the lands of the famed Gog and Magog. The savage peoples said to have been pent up behind an iron gate by Alexander the Great.

"The Two-horned [Alexander the Great] travelled to the region of Ya'güg and Ma'güg. So he got to see a nation with reddish hair and blue eyes. A great throng from among them gathered unto him, saying to him: 'O victorious king, behind this mountain there are nations whom no-one computes save God. They have ravaged our homeland, eating our fruit and our grain.' "(As-Sa'bi, c. 700.)

"When he terminated the building of the Dam between them and those peoples [of Ya'güg and Ma'güg] he left them and came to a people of red colour and red hair, where the menfolk and the women live apart from each other, and together only three days a year. Whosoever wishes to marry is obliged to do so during these three days. If a woman gives birth to a male, she relinquishes it to the father during these days, having weaned it from her breast, a female child she however keeps herself." (Aragon-Arabic ms. Date unknown.)

A similar passage is as follows;

"The author of the book al-Masälik asserts that beyond China there is a nation of ruddy complexion and red hair. The heat of the sun in their land is extreme... However, this record needs (further) examination, as ruddy traits and red hair are produced by the excess of cold and deficiency of heat, as in the case of the Slavs and the Rüs." (Al-Marväzï.)

(A section of an image from the book)

The book also mentions that in the Rígsþulais, an Eddic poem, people are designated into three groups. Each based on physical appearance. The thralls are "swarthy", the free-men "reddish and ruddy", the earls blond-haired and red in cheek.

A reference to red hair in the Thiðrekssaga, an Old Norse saga, is also mentioned which seems worthy of recollection. It concerns the character Sifka, an aide to Ermanaric.

"Sifka – his hair is as red as blood, or as the petals of the rose, and curly [or: or as the grass which is called rosalite, and cascadingly locky]. His face is light of hue and redfreckled. He has a shining body, with freckles all over, he has got a red beard, and..."

Another reference to "bloody" red comes via Clement of Alexandria;

"Among the [diverse] peoples, the Celts and the Scythians wear their hair long, without however having it well-kempt. The abundant hairdo of these barbarians has something terrifying about it, and its red colour is like a threat of war. This colour has something in common with blood."

The book also gives another passage from Isidore of Seville which mentions that Roman soldiers were given red uniforms specifically because the colour concealed bloody wounds;


"The russata, which the Greeks call Phoenician, and we call purple, was introduced by the Lacedaemonians for concealing, through its likeness with the colour of blood, the wounds of those who were wounded in battle, so that the spirit of the enemy should not rise. These were used by soldiers under the Roman consuls; and for this reason they are called russati."

Again, as we've noted before on this blog, that seeming confusion between red and purple in the ancient world. Plus another tenuous link to the Phoenicians.

Finally, I'll finish with a description of Achilles noted in the book. It comes courtesy of Leo the Deacon, a Byzantine historian.


"Having been expelled by the Scythians because of his spirit of cruelty, crudeness and arrogance, he set up his residence in Thessaly. This fact is clearly demonstrated by his clothing, a cloak with clasp buckle, the trait of fighting on foot, the reddish hair, the blue eyes, and the raging, the savageness and the cruelty."

Game of Thrones - The Fate of the Redheads

So, given that the final episode goes out in a few days time, I thought I'd give a little round up of how our redheads are doing. You may recall last year's post where we noted all the redheads and red hair references in the show - Red Hair & Game of Thrones.

Thus far Season 8 has been quite controversial. I've really enjoyed it, but many fans of the show are disappointed. Partially because some of the key characters - in particular Daenerys Targaryen - have taken a turn towards the evil. Fortunately though the red-haired characters seem to have fared pretty well. At least so far anyway.

Firstly, Tormund Giantsbane has continued to be one of the good and more likeable characters. Particularly with his light-hearted humour and giant's milk tales. A great, if slightly crazed advert for redheads.

Then on top of this, one of the other big redheads still left in the show, Melisandre - the Red Woman - essentially sacrifices herself this season for the greater good, in the quest to defeat the White Walkers. A huge step up from the child sacrifice of earlier seasons!

Finally, though, and the main reason for posting, is Sansa Stark. In this final season she's been going toe-to-toe, at least verbally, with "the mother of dragons". Given that the Dragon Queen is now on the wrong side of the great divide, Sansa is now something of a heroic figure.

Watching the last few seasons I've noticed her take on something of a Queen Elizabeth I vibe. With her red hair and stoicism it's an easy comparison to make. Given the numerous historical tropes in the show I can't help but wonder if Sansa Stark will end up on the Iron Throne in this final episode. Sitting there in true Tudor style.

(The Queen of Hearts?)

It's a dangerous thing making predictions about Game of Thrones though.

I also wonder if we'll see another trope from history in this final episode. That of George and the Dragon. Someone will have to kill that final dragon. So perhaps a newly knighted Brienne of Tarth will step up to the mark?

My predictions were wrong. The dragon lived, and melted the Iron Throne, so no one could sit upon it. However, Sansa Stark did end up becoming Queen in the North. So that wasn't too far wide of the mark :)

(Sansa Stark - crowned in the north
in the final episode)