I've been meaning to write this one for a while. I normally don't watch too much mainstream TV, but I do like Game of Thrones, and it's hard not to notice the plethora of red-haired characters in it. This is something that would have seemed quite noteworthy ten or fifteen years ago when I first started charting the fortunes of red hair. However, these days it doesn't seem quite as extraordinary. Maybe this is just me getting jaded with the topic. Had I noticed such a popular TV series with so many redheads back when I began writing it certainly wouldn't have taken me so long to catalogue it all. Then again though it was rare back then, but not so rare now.

One of the interesting things I like about Game of Thrones is that it doesn't seem afraid to appeal to traditional stereotypes regarding looks and racial characteristics. You have the often red-haired Wildlings from north of the wall, the blond-haired Lannisters. The silver-haired Targaryens. The swarthy uncivilised Dothraki tribes from across the sea - along with the countless other darker-skinned slaves and nomads which eventually end up following Daernerys Targaryen. 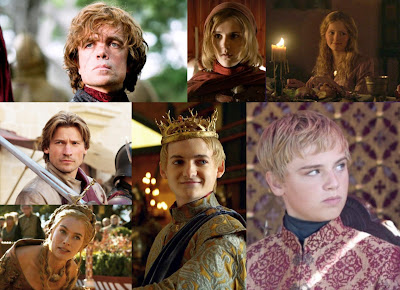 These stereotypes, all in someway lifted from actual history and human folklore, have led to accusations that the show helps perpetuate racist views and myths. Personally I would disagree with this, though I understand why people would make this accusation. It is after all quite striking to see a milk white woman being worshipped by hordes of black and brown people on TV - especially in today's era. 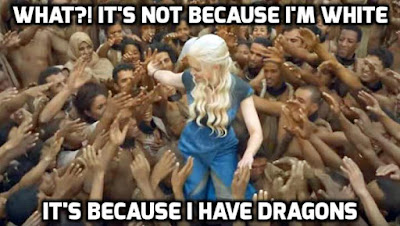 (Daernerys Targaryen being lauded by her followers)

I remember how well these tribal and family characteristics stood out when I first started watching the series - "the blond ones are Lannisters, they're all bad, the dark-haired and red-haired ones are northerners, they're good". It was like I was being told a fairy tale that I was already vaguely familiar with.

I wonder if some of the show's success lies in this appeal to these traditional tropes and associations that we all carry within ourselves somewhere deep down. Does a blonde-haired princess just make more sense to us deep down on some fundamental level? Is this a product of our culture and history, or is there some tiny degree of truth in such stereotypes? It's uncomfortable, but interesting ground to cover. I certainly don't think it's good to shy away from such topics, or to censor any such artistic expressions. Again though, people are also well entitled to express any counter opinions they may have.

Personally, I prefer my TV and art to be edgy. The false and sickly tokenism we generally see today in the mainstream is just a recipe for boredom in my opinion. We mentioned before on this blog the increasing number of "token" redheads in adverts and on TV. The effort and intent is appreciated, and I'm sure it stems from a desire to do good, but I wouldn't want a generic redhead inserted unnecessarily into some TV show on my behalf. I'm sure most black people feel the same about the endless stream of black "everyman" actors we see in the media. If diversity means a diverse range of inoffensive characters everywhere then it's kinda gonna suck a bit entertainment wise.

Anyhow, with all that said, I'll list below some of the main red-haired characters that are in the show.

Sansa Stark: Eldest daughter of Eddard Stark, one of the main characters in the show. Her mother, Catelyn Stark, is also somewhat red-haired, though hers tends more towards the auburn in shade.

Ygritte: A Wildling from north of the wall, love interest of Jon Snow.

Melisandre: Also known as The Red Woman. A witch or sorceress. 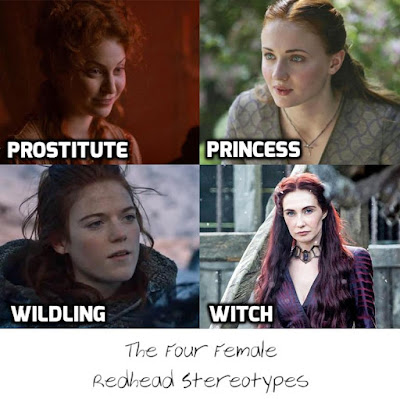 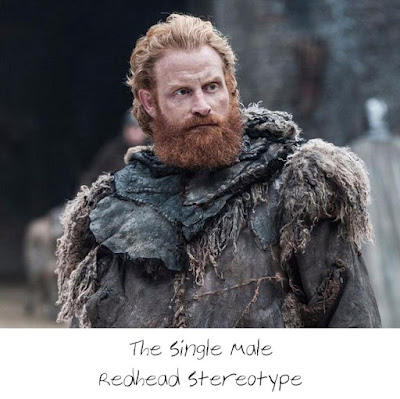 One of the more interesting references to red hair in the series comes in Season Seven, Episode Six when Tormund is in conversation with the Hound;

A similar mention comes in Season Three when Ygritte describes to Jon the person she lost her virginity to; "He came trading with his brothers. He had red hair like me. Kissed by fire". There are also numerous other mentions of red hair throughout the series, though some aren't quite as rosy in sentiment as this, such as when the character Bronn describes the man he stole the prostitute Shae from as a "ginger cunt", or when a fellow Wildling suggests that Ygritte would offer up her "ginger minge" to Jon Snow. I'll refrain from quoting that bit of dialogue in full xD

Watching the series I've quite enjoyed the frequent references to red hair. The positive mentions of it, plus the numerous strong red-haired characters, suggest a certain warmth for the trait on the part of the show's writers (I've never read the actual books, so it might be worth finding out if the theme is as strong there too). The use of terms such as "ginger" and "ginger minge" as insults in show also add to the realness and relatability. Quite a surprisingly British use of language for an American TV series.

In fact, I wonder if the weakness of the black characters in the show is actually due to the inability on the part of the writers to aim such blunt language towards them. The series abounds with labels such as "ginger cunt",  "blond-haired bastards", etc, which all give an added edge to the various factional rivalries in the show. There's also a fair amount of un-PC insults thrown towards gay and female characters in show. I wonder if the real racism lies in the show not using similar language towards its black characters. The feisty redheads in the show get insulted, which then gives them the opportunity to insult back. The various black characters in the show never get the opportunity to have the same type of exchanges - and it's these types of exchanges that in many ways make the show so endearing to its fans. Maybe that's where the problem lies.

Either way I look forward to Season Eight :D
Posted by Neil at 4:14 PM No comments:

Red Hair and the Merovingians Revisited

Someone recently left a comment drawing my attention to the following painting. Titled; The Last Merovingian, it shows a very red-haired Childeric III getting his kingly locks shorn off by three monks. Quite a striking image. 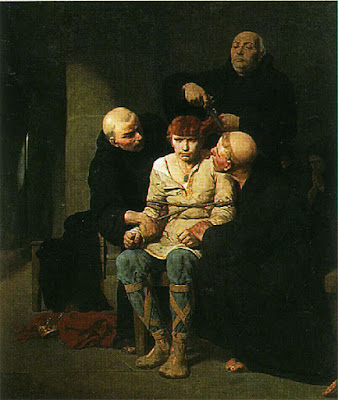 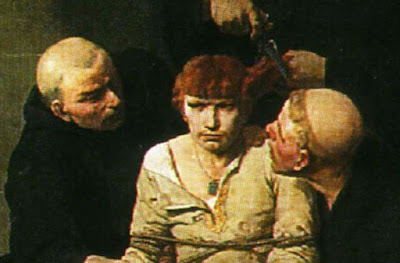 It's by the French artist Évariste-Vital Luminais. He was active during the 19th century and his works seem to feature red hair quite frequently. 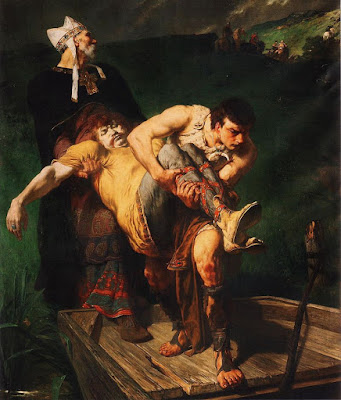 (The Death of Childeric I) 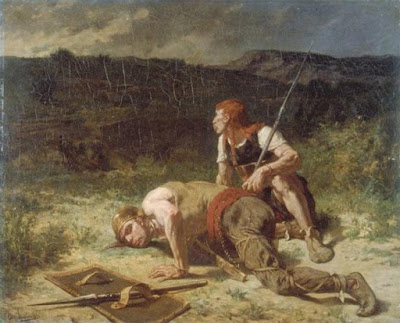 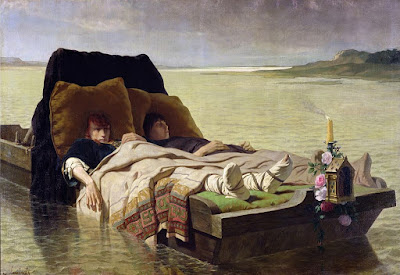 As I've mentioned before on this blog, it's sometimes repeated online that the Merovingians were said to be red-haired. However, it's difficult finding any actual sources for this claim. The Merovingians were known as the "long-haired kings" - hence the symbolic shaving of the head in the painting - but the actual colour is difficult to pin down. Of course, most Europeans tend to have an array of hair colour in their family, so it would be unlikely that any colour would be common to an entire family. Then again though, that would make it even more interesting if it were found to be the case that the Merovingians were especially red-haired.

Given how far back in the past the Merovingian story is set it's perhaps also entirely possible that their entire history is more myth than reality. In fact, given how dishonest our current media is I'm starting to wonder if this was always the case. I'm starting to view all history as simply the aggregation of nonsense. These paintings do suggest though that the tradition relating red hair and the Merovingians was current in the 19th century, and that it's not just a modern phenomena. Again though, it could just be an aesthetic choice on the part of the artist. Maybe the way we write (or in this case paint) history says more about us than it does about any supposed distant point in time.

A quick search on Google Books for the keywords "red hair Merovingian" brought up the following description from a 19th century work;

Sidonius Appollinaris saw and has delineated one of their military bands. He describes the host as bareheaded, with masses of long red hair falling between their shoulders, their bodies tightly girt about with raw hides, though naked from the knee downward, carrying neither slings nor bows, nor other missiles, except a hatchet and a short pike, to which was strung a barbed harpoon, marching on foot, and protected by no defensive armour.

Lectures on the History of France - Sir James Stephen

This description seems to parallel the descriptions of Germanic, Gaulish and British tribes given by Greek and Roman writers. Again, one wonders how much is fact and how much is imagination.

In other news I recently had contact via email with Ian Cook, the author of the red hair themed novel Redhead. Quite fitting following on from the previous topic really given the far reaching historical and mythological themes featured in book.

He informed me that there is a revised edition of the book now available, and that he's also well into the sequel, which I look forward to reading :D 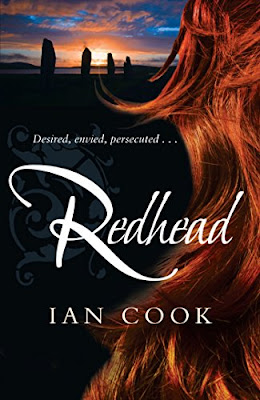