Another example of red hair denoting otherness in popular culture now. I recently re-watched the sci-fi movie The Fifth Element, and it was hard not to notice the bright orange hair of its co-star Milla Jovovich.

Jovovich plays the exotic alien/goddess Leeloo, who holds the key to saving planet earth. Her performance, like her hair, is quite striking.

The movie often gets mixed reviews from critics, but I quite like it. It's quite bright and colourful. I think it's easy to make a sci-fi that's dark and moody and still retain credibility, but to make a colourful sci-fi is a real challenge. It's quite a brave and risky thing for a film-maker to do - but very worthwhile in my opinion. It's similar to songwriting - it's easy to write a moody or angry song and still retain your cool, but writing a bubbly, pop song that doesn't look cheesy takes real talent ..and a degree of risk taking credibility-wise. There are way too many cool-looking dull movies out there.
Posted by Neil at 8:40 PM No comments:

Red Hair and the Kennedy Family

I've recently been looking at the links between red hair and the Kennedy family. I came across a few descriptions of JFK on-line that depict him with red hair. There are variations in opinion though. Some say red, others say brown, some say brownish-red or reddish-brown. One described it as blood red in colour - I'm not quite sure if that one was altogether serious though.

After looking into it a little I'd have to hazard a guess that it was probably a chestnut- type colour. Of course, hair colour can often change depending on hair length or sun exposure, so maybe it varied between a darker brown and something more reddish.

There does appear to be a definite red-haired strand within the Kennedy family though - maybe not surprising given their Irish roots. JFK's grandfather P. J. Kennedy was a redhead. The book Robert Kennedy: Brother Protector by James Hilty describes him as a "large man with thick red hair, bushy eyebrows and piercing blue eyes".

Incidentally, the same book also mentions that Robert Kennedy as a child was a "freckle-faced kid, his hair some shade of brown". Bobby also had a dog called Freckles.

The latest red-haired Kennedy, and noticeably so, is Joseph P. Kennedy III. He's a lawyer and politician and has been a member of the U,S, House of Representatives since 2013. His hair is quite red. I came across this image too recently. It's an illustration of the Queen Wealhþeow from a children's book called Stories of Beowulf, and is by an artist named J. R. Skelton. 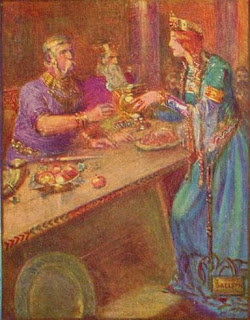 Queen Wealhþeow is a queen of the Danes in the epic poem Beowulf. She's married to the King Hrothgar. I don't think there's any evidence that either were portrayed as redheads in the text, so I'm guessing the red hair in the image is simply a choice on the part of the artist.

Again though, I would say there's a clear link to red here. Roger brings to mind the French for red; rouge. And the German variant of Roger is Rüdiger, which links in with the word ruddy - again denoting redness. The obvious sexual connotations shouldn't be lost on anyone either. Roger is slang in English for having sex, and was at one time slang for the word penis too. This links in well with the spear translation - to spear and to penetrate being one and the same. Red of course is also the colour most closely associated with the act of sex.

So I would suggest Hroth simply means red - and that Hrothgar/Roger etc therefore means red-spear. Although, of course, the word bright is not a million miles away from the word red - so "famous spear" I guess would also be another possible rendering.

Speculating further the links between red and outlaws once again springs to mind;

Red Hair in the Artwork of Franz Von Stuck

I came across some paintings of redheads in the works of Franz Stuck recently. Stuck was a German painter and sculptor who lived from 1863 to 1928. I'm reliably informed that he was Adolf Hitler's favourite painter. If this is true the number of redheads may go some way in disproving the idea that the Nazis stopped redheads from breeding for fear of degenerate offspring - a statement oft-repeated on-line. 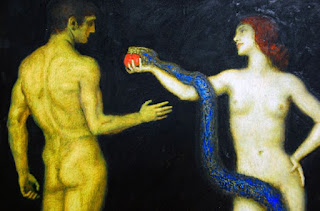 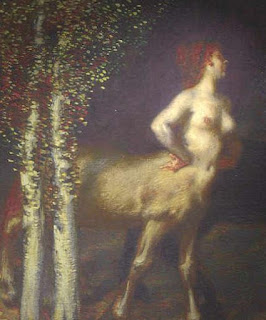 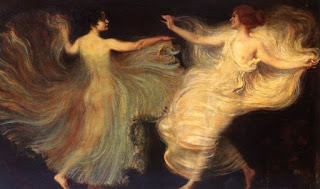 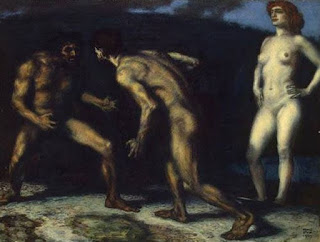 Fighting for a Woman 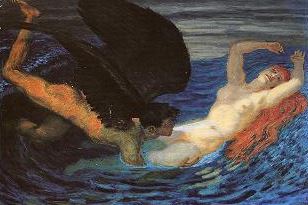 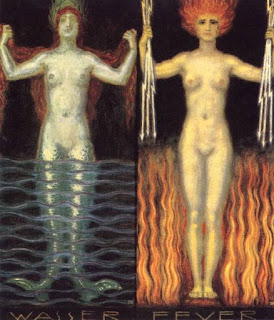 Water and Fire
Posted by Neil at 4:50 PM No comments:

I've just found out that the astronaut John Glenn - the first American to orbit the Earth - was a redhead. In 1962 Glenn orbited the Earth three times in the spacecraft Friendship 7.

His hair colour, along with his freckles, are mentioned in this 1963 documentary about his achievements. It occurs at around the three minute mark.


Of course, I'm quite sceptical about all the claims made during the Space Race. I think most of the "achievements" were probably 90% fraudulent. So I'll take this one with a pinch of salt as well. Still pretty cool to have a red-haired astronaut though.

On a side note I also recently found out that Robert F. Kennedy had a dog called Freckles :)
Posted by Neil at 10:13 AM 1 comment: