The Red Redmaynes, by Eden Phillpotts 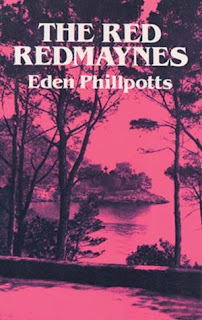 Eden Phillpotts (1862 - 1960) was an English author, poet and dramatist. He was born in Mount Abu, British India, educated in Plymouth, Devon, and worked as an insurance officer for 10 years before studying for the stage and eventually becoming a writer.

He co-wrote two plays with his daughter Adelaide Phillpotts, The Farmer's Wife (1924) and Yellow Sands (1926); but is best known as the author of many novels, plays and poems about Dartmoor. His Dartmoor cycle of 18 novels and two volumes of short stories still has many avid readers despite the fact that many titles are out of print

;The Red Redmaynes is a detective story featuring two detectives, Mark Brendon, a young British police inspector who had risen rapidly with a string of successful cases, and Peter Ganns, a much older American, who appears in the second half of this rather long novel after Brendon has failed to make any progress.

The first half of the novel takes place on Dartmoor and then on the weather-beaten coast of Devon, and Phillpotts uses these bleak landscapes effectively to create an atmosphere of impending doom. Mark Brendon is down in Dartmoor on vacation, when something unusual happens: one man disappears in what seems to be a murder, but the prime suspect is also gone. The supposedly murdered man's wife, Jenny Pendean, asks Brendon for help, and so he starts looking into the mystery. The second half of the story is set in Italy, where Jenny visits her uncle Albert Redmayne.

The title refers to Redmaynes' hair colour. Here's an excerpt from the book:

"He is now the last of the red Redmaynes, as our family was called in Australia." "Why the adjective?" "Because we were always red. Every one of my grandfather's children had red hair, and so had he. His wife was also red and the only living member of the next generation is red, too, as you see." "You are not red. Your hair is a most wonderful auburn, if I may say so."

According to reviews, the novel is on the style of Agatha Christie, although it doesn’t follow the format that later became recognisable as the traditional mystery novel. Phillpotts encouraged Christie to write and she dedicated to him the novel Peril at End House (1932). The Red Redmaynes was also admired by Jose Luis Borges, ending up at number 39 in his A Personal Library project that he never had the chance to finish.

Posted by Emanuela at 4:38 PM No comments: