For a while now I've been looking for evidence linking the orange of William of Orange (and the Protestant movement in general) to the colour orange as in red hair. Not so much that William of Orange had red hair, as I don't think he did, but more that there was at some point a symbolic relationship between red hair and reformation in northern Europe. In a nutshell I've speculated that red hair became a totemic symbol of Protestantism due to the disproportionate number of redheads on the Protestant side.

Anyway, I've found a little more evidence in the last few days. I came across a book on Google Books concerning the history of England from the Revolution to the Accession of King George III. See link: http://books.google.co.uk/books

It was published in 1744 and contained a list of medals commemorating William and Mary, along with illustrations. Two were of interest.

1. The first is a satirical medal struck by his detractors. One side shows the bust of William labelling him 'Tyrant', the other depicts him as the Biblical figure Absalom. The accompanying text in the book states;


"[H]e is represented under the figure of Absalom, hanging by his red hair (in allusion to the name of Orange) to an oak-tree[.]"

I'm not totally sure how the hair colour would be apparent on a metal medal, but I'll take his word for it. 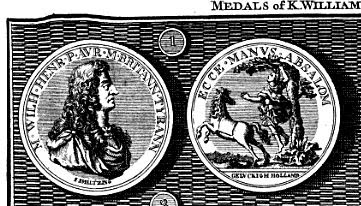 2. The second medal is much more favourable to William. This one shows him getting one over on the French :) He's likened to a red-haired fox;

"A cock and some hens (the emblems of the French King and the ladies he had taken with him to the camp) flying before a fox, the red hair of which represents the prince of Orange, King of Great Britain." 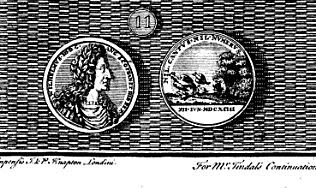 This all seems like a clear link between red hair, William and revolution, etc.

The symbol of an orange tree kept being used on these medals as well. It's kind of an obvious symbol to use for a guy called William of Orange I guess, but still it seems like something worth looking into a little bit more.

Many of the medals showed an orange tree replacing an oak tree, representing William of Orange supplanting the Stuart Kings. The oak tree became a symbol of the Stuarts supposedly because Charles II hid in an oak tree to escape Oliver Cromwell's army. Oliver Cromwell of course had red hair, as may be remembered from over posts on this topic.
Posted by Neil at 8:53 PM