I noticed a few mentions of red hair in this months Fortean Times (Oct 2015 issue). 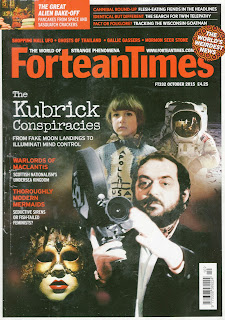 As ever these things come in threes.

Firstly on page 11 in their round up of peculiar news stories they have a sideline piece titled "Ginger Nut". I'll quote it in full;

Mark Colborne, 37, felt "belittled" because of his ginger hair and stockpiled the ingredients to make cyanide so that he could spray the deadly poison at non-Aryans to publicise his racist beliefs and put "a major dent in England". He also planned to shoot Prince Charles and William so that red-haired Harry could be king. The fascist agoraphobic, who lived with his mother in Southampton, was shopped by his half-brother. D Telegraph, D.Mail, 13 May; Eve. Standard, 14 May 2015.

I hope we're not seeing gingers being linked with terrorism! If any gingers are reading this violence is not the answer. The key is just to arrogantly assume you're better than everyone else - that's what I do ;)

The second mention of red hair comes on page 52 in an article about cryptozoology. It mentions a campfire story that inspired a book titled Goatman: Flesh or Folklore by J Nathan Couch. It concerns the tale of a recently married couple whose wagon had broken down on a treacherous stretch of road. Whilst the young groom went for help the bride came face to face with a hideous creature;


"a terrible form stood in the moonlight. It was a creature covered in coarse red hair standing on two legs like a man, but with the horned head and long muzzle of a goat."

In terror she hid herself in the wagon and eventually drifted off to sleep. The tale has a gruesome ending however, as the next day the woman wakes to find her beloved killed by the strange beast;


"On the ground she found large cloven-hooved tracks ...[S]he looked up to find the mutilated remains of the man she'd just married dangling from a gnarled limb."

The final mention of red hair is a little inadvertent and comes in a book review. On page 62, whilst reviewing a book titled The Whispering Swarm the writer produces the following line;


..Michael [the book's narrator] is introduced to Captain Turpin, Colonel Cody and Prince Rupert. And he meets the feisty Moll Midnight, with violet eyes and red-gold curls.