Red Hair and the Kennedy Family

I've recently been looking at the links between red hair and the Kennedy family. I came across a few descriptions of JFK on-line that depict him with red hair. There are variations in opinion though. Some say red, others say brown, some say brownish-red or reddish-brown. One described it as blood red in colour - I'm not quite sure if that one was altogether serious though.

After looking into it a little I'd have to hazard a guess that it was probably a chestnut- type colour. Of course, hair colour can often change depending on hair length or sun exposure, so maybe it varied between a darker brown and something more reddish.

There does appear to be a definite red-haired strand within the Kennedy family though - maybe not surprising given their Irish roots. JFK's grandfather P. J. Kennedy was a redhead. The book Robert Kennedy: Brother Protector by James Hilty describes him as a "large man with thick red hair, bushy eyebrows and piercing blue eyes".

Incidentally, the same book also mentions that Robert Kennedy as a child was a "freckle-faced kid, his hair some shade of brown". Bobby also had a dog called Freckles.

The latest red-haired Kennedy, and noticeably so, is Joseph P. Kennedy III. He's a lawyer and politician and has been a member of the U,S, House of Representatives since 2013. His hair is quite red. 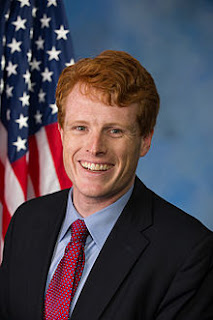