The Legend of the Fiery-Haired Girl - Maiden Tower, Baku

I came across the following tale when I was researching the history of "maidens locked in towers" for an article I intend to write for my other blog.

The story relates to a tower called Maiden Tower in Baku, Azerbaijan. In fact, I wasn't too aware of Baku before writing this article, but having looked at its Wikipedia page it looks very beautiful with lots of interesting architecture. The story itself also has its roots in something I'm only vaguely familiar with, namely the ancient Zoroastrian religion and its fire-laden mythology.

The story in question is titled The Legend of the Fiery-Haired Girl and concerns the tale of a fire-haired warrior-maiden who saves the inhabitants of ancient Baku from slavery and destruction.

The story below is a paraphrased version of the one that can be found on the Wikipedia page;


There was an ancient town-fortress in Baku, which had a Fire Temple-Tower. In very ancient times, an enemy encircled the fortress. The enemy ordered Baku's people to surrender but they refused, so they launched a siege to demolish the fortress and enslave all the inhabitants.

The Supreme Magi, together with other priests, prayed to the Holy Fire in the Tower, asking the God of Ahura Mazda to help. On the next day, the people saw that a large piece of the Holy Fire fell down from the top of the Tower. A beautiful girl came out from the fire. She had long fire-coloured hair.

She said: "Don't worry. I'll help and protect you. Give me a sword and a helmet. The enemy should not see my girl's hair, open a fortress gate". Meanwhile, the enemy's commander was waiting outside for one-to-one combat. If the fiery-haired girl won the fight, then the enemy army would back away. But if the enemy won, they would capture the fortress.

Fortunately the fiery-haired girl got the upper hand in the battle and put her knife to the commander's throat. He then screamed: "You win! Who are you? Take your helmet off. I want to see your face!" He took off the helmet and saw that she was a beautiful girl with long fire-coloured hair.

He exclaimed: "Oh, you are a girl! You are brave and beautiful girl! If girls of Baku are so brave, I'll never capture your fortress! Don't kill me, beauty!" They then fell in love with each other, she spared his life and they got married. The people then named the tower Maiden Tower as a consequence. 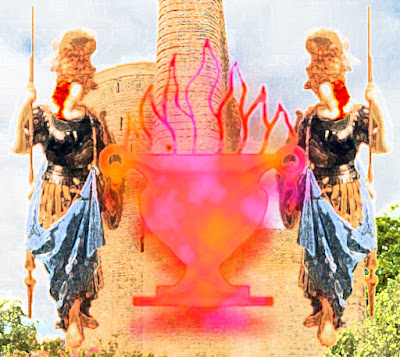