I thought I'd share some of the red-haired artwork I've came across so far in 2020. First up, one from the English artist John William Waterhouse. I'm surprised I'd never came across this one before as Waterhouse is one of my favourite painters. It's titled A Song of Springtime. 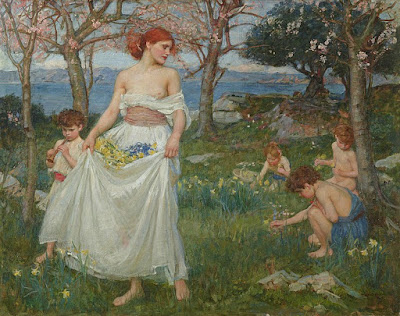 (A Song of Springtime) 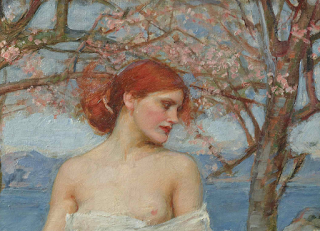 (A Song of Springtime - detail)

This next one is by the French artist Léon-Jean-Bazille Perrault and is titled Vénus à la colombe, which I'm guessing translates as Venus with dove.

Finally, we have this one. A image of Kate Barlass, by the artist Eleanor Fortescue-Brickdale. 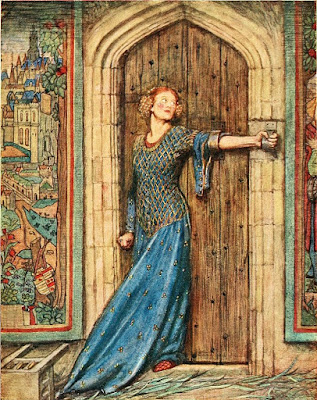 Kate Barlass, or Catherine Douglas, was a figure from Scottish history who tried to prevent the assassination of King James I in 1437. The story goes that armed men were trying to break in to kill the king. As the king tried to hide Kate placed her arm across the door in lieu of the missing bolt that was supposed to be there. Unfortunately the men broke through the door, breaking her arm in the process, and then proceeded to kill the king.

In the image above you can see her barring the door.

Thanks to this act she acquired the surname 'barlass', a combination of the words bar and lass. The lass that barred the door. Lass, a very Scottish word, meaning a young girl or woman. A word also very common around my parts in Yorkshire and the North East of England.

In keeping with the arty theme her story was actually told in verse by Dante Gabriel Rossetti, in his poem The King's Tragedy. Which contained the line "Catherine, keep the door!".

Then the Queen cried, "Catherine, keep the door,
And I to this will suffice!"
At her word I rose all dazed to my feet,
And my heart was fire and ice.

Incidentally the phrase "Katy, bar the door" is also said to be a common expression used as a warning of danger in the southern USA. It's speculated that this phrase likewise has its origins in the Kate Barlass story. Though some have speculated that it has its roots in Scottish folk songs. Either way I've never heard it used in the UK before. Perhaps it might be time to bring it back.
Posted by Neil at 10:05 PM