I've mentioned on this blog before the possible links between red hair and the Halloween pumpkin. I always had this down as a northern European, Protestant thing - I even titled a chapter in my recent (draft) book Halloween & Protestant Pumpkinheads.

Anyway, I've now come across another link between red, heads and pumpkins - only this time from the Catholic side of things.

The Zucchetto is a circular skullcap worn by various Catholic clerics (and also worn by clerics in the Syriac Orthodox Church and by the higher clergy in Anglicanism). Some are red or scarlet, others are black or white - the Pope famously wears a white one.

The name Zucchetto derives from the Italian word zucca, meaning pumpkin, as the skullcaps have the appearance of pumpkin shells - they even have a little stalk on top! 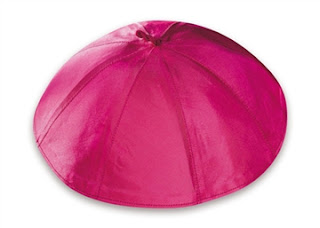 Very interesting how these themes continue to overlap. I think I'll have to reappraise my thinking on the whole topic.
Posted by Neil at 11:08 PM