The Tarim mummies are a series of mummies discovered in the Tarim Basin in present-day Xinjiang, China, which date from 1800 BC to the first centuries BC. The mummies, particularly the early ones, are frequently associated with the presence of the Indo-European Tocharian languages in the Tarim Basin, although the evidence is not totally conclusive. Victor H. Mair's team concluded that the mummies are Caucasoid, likely speakers of Indo-European languages such as the Tocharians.

Many of the mummies have been found in very good condition, owing to the dryness of the desert and the desiccation it produced in the corpses. The mummies share many typical Caucasian body features (tall stature, high cheekbones, deep-set eyes), and many of them have their hair physically intact, ranging in color from blond to red to deep brown, and generally long, curly and braided. Their costumes, and especially textiles, may indicate a common origin with Indo-European neolithic clothing techniques or a common low-level textile technology.

It has been asserted that the textiles found with the mummies are of an early European textile type based on close similarities to fragmentary textiles found in salt mines in Austria, dating from the second millennium BCE. Anthropologist Irene Good, a specialist in early Eurasian textiles, noted the woven diagonal twill pattern indicated the use of a rather sophisticated loom and said that the textile is "the easternmost known example of this kind of weaving technique.

Of the paternal lines of male remains surveyed nearly all – 11 out of 12, or around 92% – belonged to Y-DNA haplogroup R1a1, which are now most common in Northern India and Eastern Europe; the other belonged to the exceptionally rare paragroup K* (M9). The R1a1 lineage suggests a proximity of this population with groups related to the Andronovo culture, i.e. early Indo-Europeans.

The Xinjiang mummies have added another bone of contention to the raging ethnic conflict in Xinjiang, where Uighurs, a Turkic speaking people, consider themselves to be the indigenous population and the Han Chinese foreign invaders from the east. Here's an interesting article about he mummies, covering their political imlications as well.

Let's have a look at the mumies described as having red hair.

The Beauty of Loulan 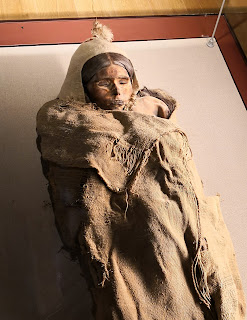 The Beauty of Loulan is the most famous of the Tarim mummies, She was discovered in 1980 by Chinese archaeologists working on a film about the Silk Road. The mummy was extremely well preserved because of the dry climate and the preservative properties of salt and was surrounded by funerary gifts. The Beauty of Loulan lived around 1800 BCE, until about the age of 45, when she died. Her cause of death is likely due to lung failure from ingesting a large amount of sand, charcoal, and dust. Her hair has been described as auburn or reddish blond. 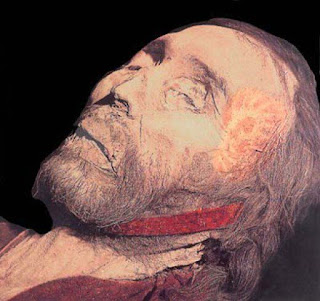 Cherchen Man or Chärchän Man or Ur-David is an adult male who is believed to have died around 1000 BC and is likely to have been aged around fifty years at the time of his death.

His height is estimated at 176–178 cm. His hair was "reddish brown flecked with grey, framing high cheekbones", he had an aquiline "long nose, full lips and a ginger beard", and was wearing "a red twill tunic" and leggings with a pattern resembling tartan. Yellow and purple spiral and sun patterns on the mummies face have been misidentified as tattoos in some sources; they are actually an ochre paint. The robe on the main of his two wives is so fine that it is hard to imagine how their weaving technology could have reached such an advanced stage by that time. In a small grave next to the main tomb, a baby was found wearing a shroud of the same burgundy color and a blue cashmere cap.

The Princess of Xiaohe 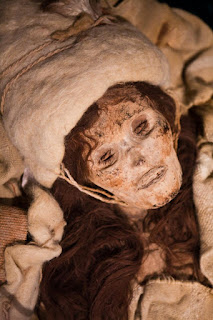 The Princess of Xiaohe is the oldest Tarim mummy, dating to 3800 years ago. When the cover of her boat coffin was removed, she was found wearing a grand white hat of felted wool. The coffin boat was filled with small pouches containing herbs. She has fair skin, red hair, long eyelashes and a felt hat resembling an alpine head covering with a long feather stuck in the top.


Here's an article about these and other Tarim mummies and here you can find HQ pictures of them.