I recently came across the following image which depicts the child Jesus being carried across the waters by Saint Christopher. In it Jesus is depicted with soft reddish hair. He's also carrying a globus cruciger, or orb and cross. It's quite notable as the orb looks markedly Earth-like. It's generally stated that the orb was said to represent the globe-shaped Earth, however this seems like the best example of that idea that's I've came across so far. The image is said to date from the 17th century, and is from the parish of Almenno San Salvatore in Italy. 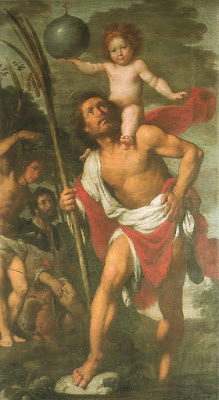 (Saint Christopher bearing
the child Jesus on his shoulders) 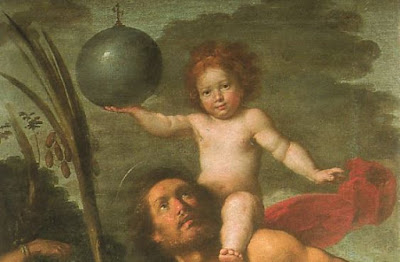 (In detail, showing the globus cruciger)

It's also perhaps worth taking a brief look at Saint Christopher himself. His name is said to mean "Christ bearer", as in popular legend he was said to have carried the child Jesus across a raging river. What has always struck me is how similar the name Christ is to the word crossed. Of course, Jesus was famously said to have been crucified on a cross - and to have carried this cross prior to the crucifixion. Hence the phrase "a cross to bear". So I wonder if Christopher could in some sense also simply mean "cross bearer". Christopher also sounds a little like "crossed over". So also fits in with the idea of river crossings.

Saint Christopher is patron saint of travellers. The Portuguese explorer Bartolomeu Dias famously sailed around the tip of Africa for the first time in a boat named São Cristóvão, meaning Saint Christopher. Likewise, Saint Christopher's namesake Christopher Columbus was said to be the first European to discover the Americas. However, since the name Columbus means "dove" it could be said that his name translates as "Dove of Christ" or perhaps even "dove crossing over". So I wonder how much of all this is literal history and how much is purely symbolic allegory.

The Portuguese were also said to have discovered the Americas independently. Though in their case it was an accidental discovery, as opposed to the more deliberate voyage taken by Columbus in search of the East. The Portuguese were gradually exploring the west coast of Africa and the various Atlantic islands, so it would perhaps makes sense that through a stray voyage they would alight upon the east coast of Brazil. So I wonder if the supposed Spanish discovery by Columbus is a re-writing of history in some sense.

I also came across the following French quote, originally from a work titled Histoire des Perruques (or The History of Wigs) by the 17th century French theologian Jean-Baptiste Thiers.

(The quote in question)

It loosely translates as; the redheads wore wigs, to hide the colour of their hair, which was abhorred by the whole world, as Judas was said to be red-haired.

It's an interesting quote as not only does it reinforce the idea that Judas was associated with red hair, but it also tells us that redheads actively hid the colour of their hair under wigs. I guess in a similar way to how redheads today may dye their hair blond or dark.

Thanks to the same source text on Google Books I also discovered that the term crine ruber - Latin for red-haired - was used an insult. Which is something perhaps worth remembering when further investigating things.

Finally, I also came across the following book online which is well worth mentioning as it seems to be jammed full of interesting information relating to red hair, amongst other things. I've just skimmed through it so far, but really look forward to reading it over the next week or so.

The Naming of Russia - by Håkon Stang