First up, I came across the following image depicting a red-haired Saint George slaying a dragon. It's a Russian icon said to be from the 15th century. I've came across a few versions of the image online, all showing slightly differing colouration. As ever it can be difficult to discern whether online reproductions convey the colouring correctly. Or indeed if the actual painting itself has not lost some of its lustre over the ages. So whether the painter intended to depict a redhead is unclear. Either way it's quite a beautiful image well worth sharing. 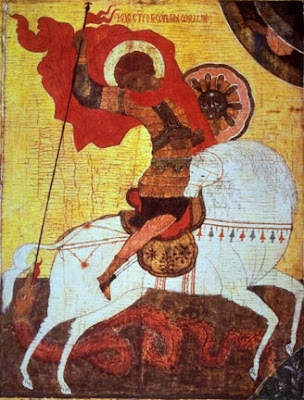 I've also recently been trying to find further information relating to red hair and leprosy. Not a nice association to make, but something that's piqued my curiosity ever since I came across a text suggesting that Indian Muslims once believed redheads to be leprous. In my book I briefly mentioned this, along with the fact that I'd failed to find any further information. So this is a nice little follow up.

In the book I wrote;


Baldwin IV, King of Jerusalem was red-haired too. He was described as "a blue-eyed, freckled, leprous evil-doer." Curiously there is, or was, a train of thought in some parts of the world that actually linked red hair with leprosy. In a 1662 book I came across by the German scholar Adam Olearius titled The Voyages & Travels of the Ambassadors (translated into English by John Davies) it states that Indian Muslims "love not flaxen or fair hair'd people, and have an aversion for such as are red hair'd, out of an opinion they have, that they are Leprous." It would be interesting to pursue this line of enquiry further, but so far I've only found the odd link here and there.

So this is what I've found recently.

The following passage is from a journal published in 1864. It's doubly interesting as it also speaks of leprosy in relation to Jewish people, and as has often been mentioned on here, there often seem to be links and overlaps in history between Jews and red hair.


"In that region leprosy has always prevailed; and an ancient scandal, refuted by Josephus, affirms that the Jews were driven out of Egypt because they were lepers. The Egyptians, says a lively writer, were singular in their choice of a king. They did not require him to be virtuous, but they would not tolerate a candidate with red hair, because there was some connection in their minds between men of that complexion and the leprosy!"

This apparent association made between red hair and leprosy seems quite odd. I can only think that perhaps the pale skin of redheads was somewhat reminiscent of the discolouration of the skin that sometimes accompanies leprosy. Perhaps people native to the Middle East were so unfamiliar with redheads at that time that they just assumed that any they came across were victims of disease or disfigurement in some way. Though I'm completely guessing here.

In fact, having quickly read the Wikipedia page for leprosy to get an overview I can't help but think that once again the history is quite confused. Perhaps the label "leper" became a catchall term for many different afflictions throughout the ages. The fact that it also tends to afflict people in poverty more so than people in affluence makes me wonder if even the science is worthy of a re-look. Perhaps a topic for further investigation.

My next find comes from another 19th century work. This one tilted Melchizedek to Zachariah by the Reverend Sabine Baring-Gould. He first mentions the red hair that King David was said to have, then further down the page mentions how David was said to possess the power to inflict leprosy on others;


The Jewish authors relate, as do the Mussulman historians, that David had red hair. In Jalkut (1 Sam. xvi. 12) it is said, "Samuel sent, and made David come before him, and he had red hair;" and again in Bereschith Rabba, 'When Samuel saw that David had red hair, he feared and said, He will shed blood as did Esau. But the ever-blessed God said, This man will shed it with unimpassioned eyes - this did not Esau...

...David was gifted with the evil eye, and was able to give the leprosy by turning a malignant glance upon any man. "When it is written, 'The Philistine cursed David by his gods,' David looked at him with the evil eye. For whoever was looked upon by him with the evil eye became leprous as Joab knew to his cost, for after David had cast the evil glance on him, it is said, 'Let there not fail from the house of Joab one that hath an issue, or that is a leper'.

The same befell the Philistine when he cursed David. David then threw on him the malignant glance, and fixed it on his brow, that he might at once become leprous; and at the same moment the stone and the leprosy struck him."

But David was himself afflicted for six months with this loathsome malady, and it is in reference to this that he says, "Thou shalt purge me with hyssop, and I shall be clean; Thou shalt wash me, and I shall be whiter than snow."

The idea that David could inflict leprosy on people with the "evil eye" reminds me, in a reverse kind of way, of Christ's ability to heal people. Both are powers over a person's health that perhaps rely on faith and belief. I wonder if these powers are similar in some sense to the placebo (or nocebo) effect. The power of positive/negative thinking seems to be a very real thing - whether you look at it from a religious or a rationalist point of view. It's certainly quite a curious and perhaps beneficial thing to look into I think.

Coincidentally, I also recently watched a video where the illusionist Derren Brown speaks of his experiences of this. He comes at it from a purely atheistic view. So it's interesting that he seems to be approaching a similar conclusion regarding faith and belief to that of more religiously inclined thinkers. It has very little to do with red hair, but offers some fascinating insights :)

Hopefully I'll be returning to the topic of red hair and leprosy in the future when I find further examples to share.
Posted by Neil at 11:53 PM