I've been searching through all the various Pre-Raphaelite images. I got a bit sidetracked with all the Dante Gabriel Rossetti ones. Over a dozen redheads so far. I'll share a few images by the French artist Jules Joseph Lefebvre today though. I'm not sure if he technically counts as a Pre-Raphaelite, but his paintings have the general look. Plus I'm fairly sure that I originally came across the first image I'm about to share in a huge book of Pre-Raphaelite art that I had over a decade or so ago which has since disappeared.

I have no idea why this one would stick in my mind so well after all this time. It depicts Mary Magdalene, not quite in the biblical tradition, and is titled Mary Magdalene in the Cave. 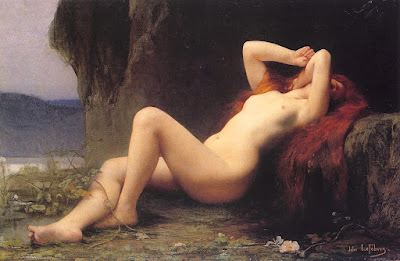 (Mary Magdalene in the Cave)

This second image is titled Young Woman with Morning Glories in Her Hair. The hair in this one is more of a soft, shiny auburn colour. 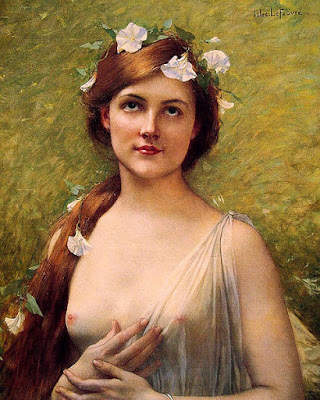 (Young Woman with Morning
Glories in Her Hair)