Red-Headed Woman is a 1932 American pre-Code romantic comedy film, produced by Metro-Goldwyn-Mayer, based on the 1931 novel of the same name by Katharine Brush, and a screenplay by Anita Loos. It was directed by Jack Conway and stars Jean Harlow as a woman who uses sex to advance her social position

Lillian "Lil" Andrews (Jean Harlow) is a young woman, living in Ohio, who will do anything to improve herself. She seduces her wealthy boss William "Bill" Legendre Jr. (Chester Morris) and cleverly breaks up his marriage with his loving wife Irene (Leila Hyams). Irene reconsiders and tries to reconcile with Bill, only to find he has married Lil the previous day.

However, Lil finds herself shunned by high society, including Bill's father, Will Legendre, Sr. (Lewis Stone), because of her lower-class origins and homewrecking. When Charles B. Gaerste (Henry Stephenson), a nationally known coal tycoon and the main customer of the Legendre's company, visits the city, Lil thinks she has found a way to force her way into the highest social circles. She seduces Charles, then blackmails him into throwing a party at her mansion, knowing that no one would dare offend him by not showing up. It seems like a social coup for Lil, until her hairdresser friend and confidante Sally (Una Merkel) points out that all the guests have left early to attend a surprise party for Irene (who lives across the street).

Humiliated, she decides to move to New York City, even if it means a temporary separation from her husband. Will Sr. finds Lil's handkerchief at Gaerste's place and correctly guesses what Lil has done. He shows his evidence to his son, who hires detectives to watch Lil. They find that she is conducting not one, but two affairs, with Charles and his handsome French chauffeur Albert (Charles Boyer). Bill shows Charles damning photographs.

When Lil learns that Charles has found out about her, she returns to Bill, only to find him with Irene. Furious, she shoots him, but he survives and refuses to have her charged with attempted murder. However, he does divorce her, and remarries Irene. Two years later, he sees her again, at a racetrack in Paris, in the company of an aged Frenchman. He discreetly hides Irene's binoculars. In the final scene, Lil and her elderly companion get into a limousine driven by Albert.

Here's a scene from the film.

A film star finds herself in trouble with her co-star when she has to flirt with the backer to prevent him withdrawing his support. But all ends well. 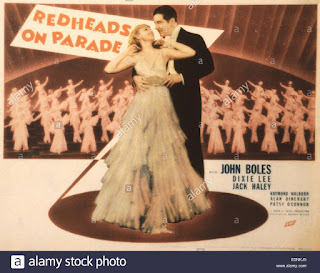 Rich Matthew Thurlow, spends nearly every night at cabarets, admires Dazie, a leading dancer whom he calls "Redhead." Dazie loves Matthew, but she is dismayed that he wastes his life in clubs. After Matthew, while intoxicated, marries Dazie to win a bet, Dazie insists that they remain married. When Matthew's uncle cuts off his allowance and ends his "soft" bank job, Dazie decides to make a man out of Matthew, but he scorns her. She rents a small apartment, while he gets work in an auto factory. Although Matthew is genial when Dazie's parents visit, he remains cold to her. When Matthew's uncle offers Dazie money for a divorce, she refuses, but says that she will agree to a divorce if Matthew really wants one. Matthew develops a new interest in life and realizes he loves Dazie when he becomes jealous through a misunderstanding. After his uncle, seeing Dazie's effect on Matthew, threatens to disinherit him for good if he does divorce her, Matthew confesses his love. 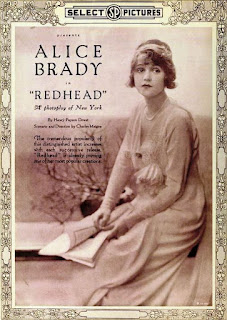 A young playboy and a girl marry because they think the boy's rich father will pay the girl $20,000 to divorce his son, and they will then split the money. Instead, the father works out a deal with the girl in which she will not only stay married to him, but try to reform him.