Yet more films about redheads (pt. 3)

A girl marries a playboy from a rich family, expecting a life of comfort and luxury. However, her new father-in-law turns his ne'er-do-well son out into the street with no money, and promises the girl that if she can make a man out of her new husband, the father will give her $10,000 and see that she gets a quick divorce. 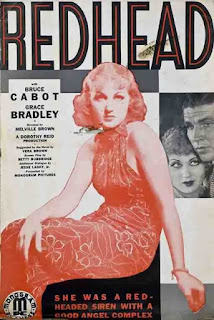 Redhead from Manhattan is a 1943 comedy film directed by Lew Landers and written by Joseph Hoffman. The film stars Lupe Vélez in one of her last screen appearances, Michael Duane, Tim Ryan, Gerald Mohr, Lillian Yarbo and Arthur Loft.

Lupe Vélez plays a dual role, twin sisters Rita and Elaine. After escaping a torpedoed ship, Rita shows up in Manhattan, where she takes the place of her Broadway-star twin sister Elaine, who's having problems with her marriage and needs to make a getaway. Neither Elaine's husband or Rita's saxophone-player boyfriend are aware of the switch.

A short scene from the film.

The Redhead from Wyoming

The Redhead from Wyoming is a 1953 American Western film produced by Leonard Goldstein and directed by Lee Sholem. It stars Maureen O'Hara, William Bishop and Alexander Scourby.

In Wyoming, Sweetwater town sheriff Stan Blaine finds himself in the middle of a range war between greedy cattle barons and newcomer settlers who compete for public lands and unbranded stray cattle.

The Reformer and the Redhead

The Reformer and the Redhead is a 1950 American romantic comedy film written, produced and directed by Norman Panama and Melvin Frank, and starring June Allyson and Dick Powell.

Hot-tempered Kathleen Maguire enlists the services of a young attorney to help her zookeeper father get his job back after he is fired for political reasons. In the midst of uncovering local political corruption and dealing with a lion that's escaped from the zoo, the two manage to fall in love.

Polly Redhead is a 1917 American silent comedy film directed by Jack Conway and starring Ella Hall, Gertrude Astor and Charles Hill Mailes. One source claims this film is lost, while another claims it survives at the Museum Of Modern Art , New York.

Aside from the fact that Polly had red hair in abundance, she was not otherwise an exceptional child, save for one thing. She was willing to work and slave, if need be, to keep her baby brother, affectionately termed "The Lump," from being sent to the poor house. So she did housework and prepared breakfasts for John Ruffin, an attorney, and Hon. Gedge-Tompkins. John Ruffin's sister, Lady Osterly, has separated from her husband, and he holds their child. When Lady Osterly calls on Ruffin she is struck with the remarkable resemblance Polly bears to her own child. Ruffin and Lady Osterly formulate a plan to come into possession of her daughter, by using Polly as a substitute. When they offer Polly twenty sovereigns to go to the Duke of Osterly's home and impersonate the other child, the amount of money fairly staggers Polly and she accepts. By changing the children when the child of the Osterly's is out riding with her nurse. Polly gains access to the Duke's home and the Osterly child ... 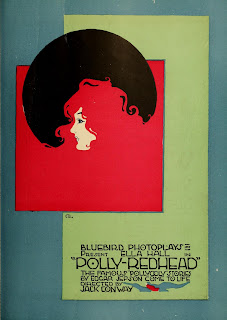