Some more redheads from history..

A short post reeling off some more redheads ..or at least possible redheads.
Firstly I came across the following quote about the English martyr John Rogers.

"Thus John Rogers, the martyr, had red hair, as appears from a painting of him now in Harvard College; and accordingly red or light hair and sandy whiskers will be found to prevail in his descendants in this country to the present day. So powerful was his constitution, that it stamped its own impress upon the great majority of his descendants. Compare the number of Rogerses who have more or less admixture of the red in the colour of their hair, with the community as a whole, and the force of this hereditary fact will be too apparent to be controverted." 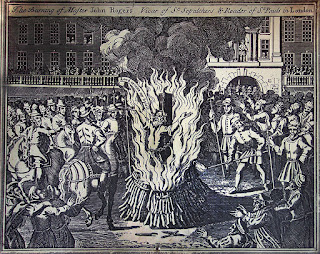 (Illustration of the death of John Rogers,
from Foxe's Book of Martyrs)
At present I can't, with any certainty, find the painting referenced in the quote. There are a few images of the man online, but all those show hair either dark or greying. So we'll have to take the writer's word for it at the moment.
Next up I have a few quotes from a piece from 1884. It concerns a National Exhibition of Portraits which took place in South Kensington. A few red-haired portraits are mentioned.
Ref: The Republic: A Weekly Journal of Politics and Society, Volume 8 1884
One notes a painting of the English poet Leigh Hunt.

"Leigh Hunt, who is painted by Haydon, and who has a pouting mouth and a mop of reddish hair, and stares from the canvas like a vexed schoolboy"

The following painting portrays Hunt and is by Haydon, so I'm guessing this is the work - the pouting mouth certainly checks out. The hair looks somewhat dark in this image, but the colours in these paintings often deteriorate over time, or render slightly differently when photographed or reproduced. 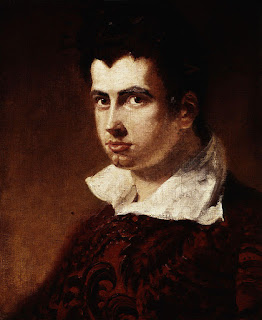 (Leigh Hunt by Benjamin Hayden)
I guess you could say there is a slight red tinge to the image. Though it does look most definitely dark. So another where the jury's slightly out.
The other quote concerned the poet Abraham Cowley.

"Cowley, with red hair hanging over his shoulders, looking very like a handsome girl" 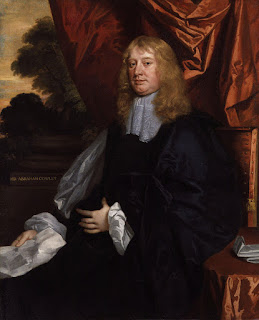 (Abraham Cowley
by the artist Peter Lely)
I guessing this is the work referenced 😅
Finally, I came across another portrait of Elizabeth Seymour, Duchess of Somerset (1667 - 1722). We've mentioned her red hair on this blog before, but I felt this portrait was worthy of a further mention. 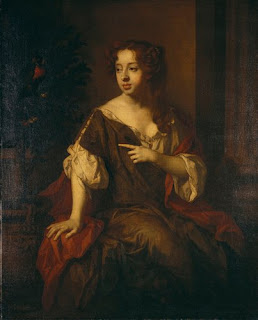 (Elizabeth Seymour by Peter Lely)
I also came across a further reference to the satirist Jonathan Swift calling her "Carrots" too. Again, something we've mentioned on here before. 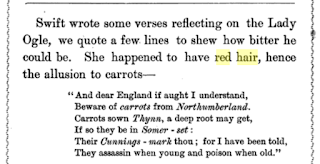 A history of Longleat by A. Farquharson, 1882

"And dear England if aught I understand,
Beware of carrots from Northumberland.
Carrots sown Thynn, a deep root may get,
If so they be in Somer - set:
Their Cunnings - mark thou; for I have been told,
They assassin when young and poison when old."