The Gebelein predynastic mummies are six naturally mummified bodies, dating to approximately 3400 BC from the Late Predynastic period of Ancient Egypt. They were the first complete predynastic bodies to be discovered. The well-preserved bodies were excavated at the end of the nineteenth century by Wallis Budge, the British Museum Keeper for Egyptology, from shallow sand graves near Gebelein (today, Naga el-Gherira) in the Egyptian desert.

Budge excavated all the bodies from the same grave site. Two were identified as male and one as female, with the others being of undetermined sex. The bodies were found in foetal positions (knees raised towards their heads), lying on their left sides, which was the most common form for Egyptian burials of the time.

Since 1901, the first body excavated (EA 32751) has remained on display in the British Museum. This body was originally nicknamed Ginger due to his red hair, although now this nickname is no longer officially used. 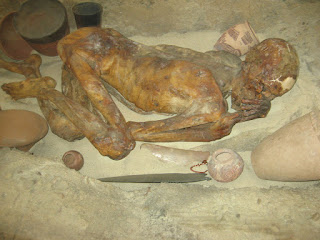 He was 1.63 metres high (5.3 feet). The body has all teeth present and healthy and there are tufts of ginger-coloured hair on the scalp. There are fractures to the ribs, right pubic ring, both thigh bones, shin and calf bones but there is no evidence of arthritis. In November 2012 it was revealed that "Ginger" had probably been murdered. A CAT scan of the mummified body taken at the Cromwell Hospital in London showed that he was aged about 18 to 20 at the time of his death and was well-muscled. Under his left shoulder blade, the scan revealed a puncture to the body; the murder weapon was used with such force that it slightly damaged the shoulder blade, but shattered the rib beneath it and penetrated the lung. It was believed that the injury was caused by a copper blade or flint knife at least 12 cm in length and 2 cm wide. Daniel Antoine, the British Museum's expert on human remains, believes that Gebelein Man had been taken by surprise by the attack as there were no defense wounds.

The mummies were acquired by the British Museum in 1900 and Ginger went on display in 1901, and was the earliest mummified body seen by the public. Apart from maintenance, it has been on continuous display in the same gallery.

Of the other five bodies, only the female adult, given museum number EA 32752, has been exhibited. In 1997-8 the body was part of a tour to Rome as part of the Palazzo Ruspoli, Ancient Faces exhibition. Again in 2001 the body went to Birmingham as part of the Gas Hall Egypt Revealed exhibition.In 2001, before going out on loan, the body had some restoration using Japanese kozo paper to secure a loose finger, reattach a rib and reattach some locks of hair. In the predynastic period bodies were usually buried naked and sometimes loosely wrapped. In such a burial, when the body is covered in warm sand, the environmental conditions mean that most of the water in the body is quickly evaporated or drained away, meaning that the corpse is naturally dried and preserved. This method was widely used in the pre-dynastic Egyptian period, before artificial mummification was developed.
Posted by Emanuela at 5:30 PM