This is quite a speculative post. Looking at the origins of red hair.

Red hair is a minority trait today, even in countries such as Scotland and Ireland where there's a higher incidence of it. However, when people speculate about where it comes from we often think in terms of a specific region, tribe or people. Was there a tribe of people at some point in history that was completely red-haired? Did it spring up independently in one particular place? Either randomly or as a consequence of some specific circumstance or environment. Or has it sprung up in multiple places, or for multiple reasons?

These are all interesting questions which no one really has a definitive answer to.

The Greek historian Herodotus spoke of a red-haired and blue-eyed tribe called the Budini. Likewise numerous other ancient Greek and Roman writers wrote of red-haired Celtic and Germanic tribes. However, these accounts, as we've mentioned on this blog before, are often not the most reliable, or easy to translate. In fact, it can often be difficult to even be sure what exact hair colour the writers were actually specifying.

Apart from these few textual accounts we don't really have any evidence for any solely red-haired tribes or peoples at all, and there are certainly none in the world today.

Speculation about red hair has also been made in relation to the Neanderthals too. The extinct archaic human group who occupied much of Europe and Central Asia as recently as 40,000 years ago. It's often stated that they carried the genes for red hair and light skin. So it's been speculated by some that red hair in modern humans has its origins here. However, again, there is much contention about this, and it's also been stated by scientists that red hair was no more common amongst Neanderthals than it is today amongst humans. With some now stating that they may not have been red-haired at all in fact.

[I've been following the Neanderthal/red hair issue on and off since before I even started writing this blog, and the consensus seems to shift constantly - it's quite hard to keep up! Perhaps it's deserving of another article at some point in the future maybe. As it's been a long time since I had a good search for articles about it.]

So, anyway, onto my article proper..

The speculation I'm going to make today runs counter to all this specific tribe/location stuff. In fact, in many ways it's completely counter intuitive in of itself, as redheads are often thought of as being especially pale and fair skinned. Even more so than blond-haired people. They're seen as being at the extreme end of the spectrum. However, in spite of this I'm going to speculate that perhaps red hair is a consequence of race mixing. Odd though that may sound.

My thinking goes something like this. Firstly, let's look at the stereotypical characteristics of redheads. Freckles, hazel eyes ..and of course red hair.

Now obviously there are many redheads without freckles and with varying other eye colours, but it's these particular features that are most interesting in regard the idea I'm putting forth. So bear with me :)


The Geography of Light and Dark Hair

The second part of my thinking goes like this. (Sorry, there's some more reading, but don't worry there are pictures now too!). If we associate dark hair and dark skin with areas of high sunlight, such as at the equator, and light hair and light skin with areas of low sunlight, such as places like Sweden or Iceland. Then we could see everywhere in between these two extremes as somewhere on that spectrum from light to dark.

Now normally, especially in more ancient times, people would predominantly mix with the nearby tribes adjacent to them. Travelling long distances across land would take a long time and it would also mean travelling through territory belonging to others tribes. Perhaps hostile tribes. So the majority of people will not have travelled too far from home in days gone by. 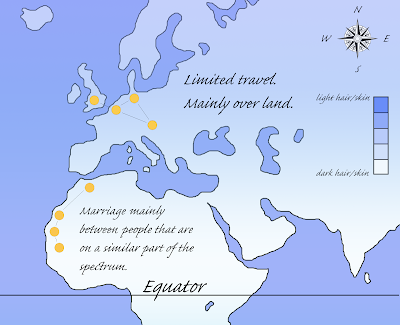 However, when people start travelling longer distances, especially long distance by sea, where they can bypass all the inland tribes. Then all of a sudden they can meet, and potentially have children with people who look very different to themselves. 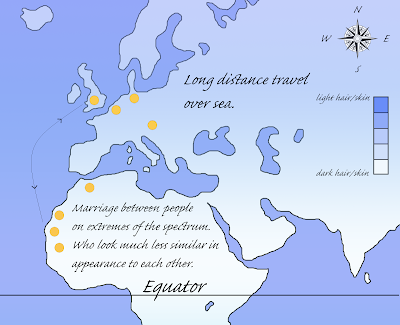 When this happens the children will get two sets of very different genes for appearance. So their appearance will be more varied, as they essentially have a much bigger palette of colours from which to inherit that appearance from.

Now most of course will end up just being slightly darker or lighter. Some intermediate place on the spectrum between their two parents. However, some, through some random pick and mix combination, may end up with more exotic physical attributes. In between the two extremes, but not quite as smoothly delineated. Perhaps very light skin, but with very dark hair for example. Or some other patchwork combination.

Maybe it's from this random lottery that red hair stems?

And it should be noted that it doesn't even have to be a recent ancestor. For example, it could be that an influx of very different looking strangers into a community could leave a genetic legacy that results in these peculiar differences popping up from time to time. Perhaps Irish families with redheads scattered about their family line have exotic ancestors from centuries ago that still leave their diluted, but sporadic imprint on modern generations. (The ancient Irish perhaps having interactions with people sailing up and down the Iberian coast.)

Again, it's quite a counter intuitive idea, and doesn't quite stack up with how white and fair skinned redheads tend to be. However, there are some other things in its favour. For instance, a quick Google Image search will show plenty of mixed race people with red hair and/or freckles.

Current scientific consensus states that for this to occur both parents must have the gene for red hair somewhere on their family tree. Essentially meaning both parents need to have inherited this "red hair gene" from a European ancestor somewhere down the line. But as we've seen with the above Neanderthal speculation. None of this science is as yet fully understood or settled.

Also, and it's a familiar topic on this blog, there are countless associations between red hair and sailing from history. For example, it's often been stated that the sea-faring Phoenicians were red-haired. Likewise Aristotle asked;

"Why have fishermen reddish hair, and divers for murex, and in short all who work on the sea?"

Is it that sailing and coastal people meet and intermarry with people from further afield because of this greater opportunity for long distance travel? (Assuming the Aristotle quote is correctly translated and understood too of course!).

We've also noted on this blog that red hair seemed especially common amongst Jewish people throughout history. Is this too a product of the fact that Jewish people were well travelled and married and interacted with people from far afield? Perhaps it was likewise the case with all the red-haired royals we've noted on these pages. Again, marrying foreign princes and kings. Unlike the local folk who simply married someone from the nearest village.

In summary, as stated at the very start, this is all very speculative. So as an idea it's a little bit out on a limb. However, it's an interesting way to look at the issue, and it may explain why red hair always seems to be a minority trait. Even within families. Perhaps it is at least part of the explanation. If indeed there is a single explanation for red hair.
Posted by Neil at 1:20 AM