Another short post, this time to highlight a famous redhead from Persian folklore. 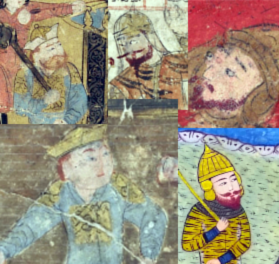 (The reddish hair of Rostam)

Rostam, sometimes spelt Rustam, is a celebrated hero from the Persian epic Shahnameh. In artwork he's often depicted with red hair and beard, as can be seen above, and in the images in the following excellent article.


The hair on his head all red, his hair like blood,
he emerged like the shining Sun.
Both hands full of blood, he was born of his mother,
No one has ever known of a child like this.

Interestingly, the name Rustam begins with the word rust, which obviously comes with connotations of red. Wikipedia gives the etymology as;

Which I'm guessing are words of Persian origin. Raodh sounds like red (or at least looks like red to my untrained eyes). It's reminiscent of the Old High German word hruod, which was said to mean "fame" or "glory", but which I've speculated is another "red" variant.

Also the mother of Rostam was Rudabeh. Wikipedia derives her name as follows;

So again we have the rud/red beginning. Though obviously I'm hugely speculating here, and it's quite unlikely that any of these words signify redness. Especially as the official etymologies state something quite different. Still though, it's always worth noting these little things. As I've learnt from previous investigations that often there are great overlaps between all languages, cultures and traditions.
Posted by Neil at 3:49 PM