Emanuela also brought another redhead to my attention. This one being the ancient Roman general and statesman Lucius Cornelius Sulla. According to Wikipedia he had red-blond hair, blue eyes and a dead-white face covered with red marks. The ancient historian Plutarch stated;


"His golden head of hair gave him a singular appearance." 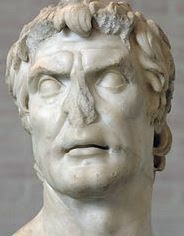