Red Hair in the Works of Helena Petrovna Blavatsky

I came across a few interesting references to red hair in the works of Madame Blavatsky, co-founder of the famed Theosophical Society. 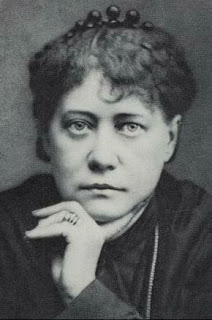 Firstly this from Isis Unveiled;


In India, as well as in Russia and some other countries, there is an instinctive repugnance to stepping across a man's shadow, especially if he have red hair; and in the former country, natives are extremely reluctant to shake hands with persons of another race. These are not idle fancies. Every person emits a magnetic exhalation or aura, and a man may be in perfect physical health, but at the same time his exhalation may have a morbific character for others, sensitive to such subtile influences.


The magnetism of a red-haired man, we have found, in almost every nation, is instinctively dreaded. We might quote proverbs from the Russian, Persian, Georgian, Hindustani, French, Turkish, and even German, to show that treachery and other vices are popularly supposed to accompany the rufous complexion.

Secondly this, from a piece titled The Legend of the Blue Lotus; In it she recalls the eastern legend of the Blue Lotus - a story of a king who must sacrifice his eldest son. The son refuses to be the sacrificial victim and tries to find a substitute to take his place. A sin for which he is punished by God.


"A prince who does not know how to die for his subjects is not worthy to reign over the children of the Sun. He will be reborn in a race of red haired peoples, a barbarous and selfish race, and the nations which descend from him will have a heritage ever on the decline."

"He reincarnated in the family of a foreigner without caste (Mleccha-Yavana) and became the ancestor of the barbarous and red-haired races which dwell in the West."

The general theme here seems to be red equals bad.
Posted by Neil at 10:53 AM