Red Hair in the Works of George Orwell 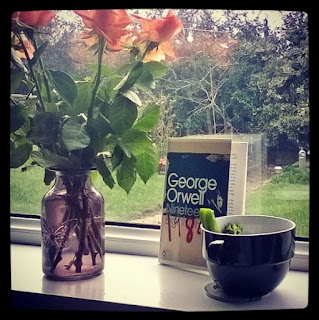 Anyway, towards the end of the book there was a passing reference to red hair. The reference was quite inconsequential, with red hair simply being used in passing to make a general point about the particulars of the Newspeak language which is a staple of the book.

No doubt an odd sentence to anyone who hasn't read the book.

I was quite pleased to find a mention of red hair in such an important work of fiction, even if it was an arbitrary one, and it inspired me to look for mentions of red hair in his other works.

I found a few. The first one comes in the work The Road to Wigan Pier. In the book he charts the appalling living conditions of the working class people living in the industrialised north of England. In one passage he describes a sight he encountered.


There are scenes that stand out vividly in my memory. The almost bare living-room of a cottage in a little mining village, where the whole family was out of work and everyone seemed to be underfed; and the big family of grown-up sons and daughters sprawling aimlessly about, all strangely alike with red hair, splendid bones, and pinched faces ruined by malnutrition and idleness; and one tall son sitting by the fire-place, too listless even to notice the entry of a stranger, and slowly peeling a sticky sock from a bare foot.

The second mention comes in his work Down and Out in Paris and London. In Chapter 3 he describes his experiences of poverty whilst living in Paris.


...I used to sell a few of my clothes, smuggling them out of the hotel in small packets and taking them to a secondhand shop in the rue de la Montagne St Geneviève. The shopman was a red-haired Jew, an extraordinary disagreeable man, who used to fall into furious rages at the sight of a client. From his manner one would have supposed that we had done him some injury by coming to him. ‘Merde!’ he used to shout, ‘you here again? What do you think this is? A soup kitchen?’ And he paid incredibly low prices.

This is interesting as it can be taken as another account of a red-haired Jewish figure in literature. Although the book is a real life account and not a work of fiction it does fall into the habit of portraying a red-haired Jewish character in a familiar unflattering light. Complete with disagreeable manners and an interest in financial gain.

It's not very common these days to encounter red-haired Jewish people, so this encounter with a red-haired Jewish shopkeep seems like quite an unfamiliar scenario to the eyes of any modern reader. (Though the old-fashioned role of the shopkeep in general has somewhat went extinct in our modern age of high street chains.)

One wonders just how different population demographics were in previous times. Were things quite so different? Or was Orwell maybe taking liberties with the truth?

It'll be interesting to see if any further references to red hair pop up in his other works.
Posted by Neil at 10:16 PM