This first one is an interesting one if true; Girolamo Savonarola. 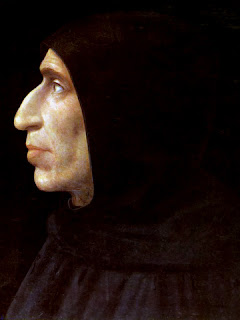 Savonarola was the Italian friar who inspired the destruction of secular art and cultural objects (the famed bonfires of the vanities) with his prophetic preaching.

The book; A Crown of Fire, gives the following description of him;


We are now in the summer of 1472. Girolamo is twenty years of age. From this time we have a somewhat sketchy but not wholly inadequate descriptive portrait of the young man. It is by one of his contempories, Francesco Pico della Mirandola, the uncle of the great humanist.

Pico shows Girolamo to have been a person of average height. He had a habit of walking very erect, his head and shoulders thrown back, and vigorously swinging his arms. He was of a genial disposition, of ready wit and even jocose at times. His eyelashes were of a peculiar color, ruddy, dark orange-like, but much lighter than his eyebrows. He wore his dark red hair in curls falling to his shoulders. He had a strong aquiline nose, a large mouth, and a slightly receding forehead.

Moving forward in time to revolutionary France we also have the radical journalist Jean-Paul Marat. Pictured below in the now iconic painting The Death of Marat. 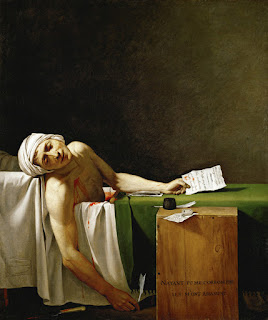 The references to him having red hair are a little tentative. The first is from a web article that asks;

Did he have red hair, as well as Carlyle alludes to him as "red-headed?"
http://prabook.com/web/person-view.html?profileId=1344181

The second comes in a book titled Killer Doctors: The Ultimate Betrayal of Trust. It contains the following description;


By the age of 16 Marat had reached his full adult height of precisely five feet and he was slight of build to boot. Jean-Paul had a nose like the beak of a hawk, was cross-eyed, had a mouth to match his nose and a shock of red hair that would make him instantly recognisable in the years ahead.

The final possible redhead to add to this short list is the poet and painter William Blake. The reference to him possibly having red hair coming in the book William Blake: A New Kind of Man.


To judge from his later physique, Blake must have been a thick-set, tough little boy with ruddy limbs, a broad face, snub nose and a shock of golden-red hair. 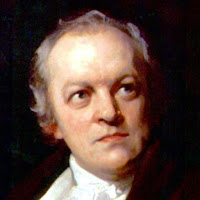 This seems a little bit like guess work, but I've seen him mentioned in lists of red-haired people elsewhere online so it may be the case.