An artist's notes on (red) hair

In my wanderings I came across another old article that mentions red hair. It's titled 'An Artists Notes On Hair', and comes from a 19th century publication titled 'The art journal London (1857)'. 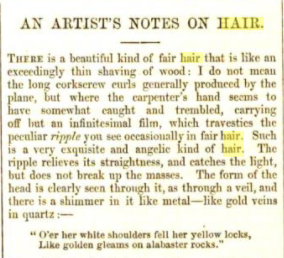 "The pale gold runs into the full gold, that into the coppery, then into the red, then into the auburn, and lastly into the dark, almost black hair, with red in it. This is the grandest kind of hair, perhaps, of all - grander even than the black hair with bright blue lights, because it is stronger in character, richer, and more vital. It is hair one would fancy Samson had. This kind, however, is very uncommon. I have not seen it in perfection more than once or twice.

Red hair is not often the subject of praise, nevertheless, there are several kinds of it that are very beautiful. I know but one, indeed, which I cannot like, and that is the fiery, brick-dusty version which is associated with an unpleasing complexion of the sallow, pale, tallowy, or fire-burnt character. When, however, the complexion is agreeable - and it often is the most charming and peachy when the hair is red - then the quality of the hair is commonly pleasing too. The delicacy of these tints, however, agrees better with the female than the male character, and therefore red hair is more agreeable in a woman than a man, in whom a certain pronounced vigour of appearance is looked for, which in red hair is apt to fall into the aforesaid brick-dusty and fiery."

The entire article can be found here; https://books.google.co.uk
Posted by Neil at 12:39 PM