All the passages in this post will be coming from a work titled The Hair: Its Growth, Care, Diseases and Treatment, written by one Charles Henri Leonard. Published 1879. It's quite a treasure trove of anecdote and information. I'll relay the contents by page number for simplicity.

"In red hair is found a reddish oil, a small quantity of iron,
but a large quantity of sulphur."

"Mr. H. C. Sorby has succeeded in extracting the coloring matter of human hair, and found that there are three coloring pigments, yellow red and black, and that all the shades are produced by the mixture of these three primary colors.

In the pure golden, yellow hair there is only the yellow pigment; in red hair the red pigment is mixed with more or less yellow, producing the various shades of red and orange; in dark hair the black is always mixed with yellow and red, but the latter are overpowered by the black; and it seems that even the blackest hair, such as that of the Negro, contains as much red pigment as the very reddest hair. He concludes from this, that if in the Negro the black pigment had not been developed, the hair of all Negros would be as fiery a red as the reddest hair of an Englishman."

The antiquated terminology aside, it's quite interesting that the author notes that black hair also contains the red pigmentation, which is "overpowered" by the darker pigment. As this tallies fairly well with what we currently know from genetics. Though the author here splits things into three pigments (yellow, red and black) in contrast to how we now view things. With skin and hair colour being a product of two factors; eumelanin and pheomelanin.

"Red-haired people are firm in their convictions, and are great lovers of their mother country, people and church; notably so are the Scotch. Their morals are of the sturdy, Puritanic type. Such people are classed as of sanguine temperament. When the hair is coarse and harsh, brutality and sensuousness marks the character of the possessor."

"Sibley gives a case where a girl, of Somersetshire, had one side of her head covered with jet-black hair, whilst the other side was covered with hair of a reddish yellow. The body hair was as characteristically marked. The mother's hair was a carroty-red."

"A case is related by Bogue of a young gentleman, possessing a fine head of brown hair, going to Samatra for a few years when, on his return, his friends found it difficult to recognize him, as the brown hair of his head was replaced by that of a positive red color."

The ancient Greeks and Romans sanctioned it; for the saintly Tertullian, of Carthage, had occasion to reprimand his flock because "they were continually engaged in giving their hair a lighter color." St. Jerome, living a couple of centuries later, wrote that "the people dye their hair red." Aelian incidentally refers to the same coloring process, when he speaks of the beauteous blonde tresses of Atalanta, in saying that they were "yellow, not produced by any womanly art, but altogether natural." Soloman, so Josephus says, was the first to bring into notice golden hair, for he had the hair of his pages powdered with gold. And the Musselman, likewise, deems it almost a sacred duty to dye his hair and beard a reddish-yellow color."

"It is said that red hair was not known to the old inhabitants of England, until the country was invaded by the Saxons and the Danes. The Danish soldiers, prior to the Norman conquest, who were quartered in England during the reign of Ethelred II. (968), had red hair. The second son of William, Duke of Normandy, who conquered England at the battle of Hastings, and who succeeded to the crown, was called Rufus on account of his red hair. Ossian, in his poems, scarcely mentions any beautiful man or woman without clothing them with a cranial covering of reddish hue. The ancient Gauls also manifested this predilection for red hair. The Turks, it is said, liked red-haired women, and the Tripolitan ladies aid in this coloration with vermilion. Some of the central African tribes manifest a similar fondness."

This little passage led me to look up the poetry of Ossian, I'll note my findings in the next post.

"In the matter of the color of the hair, Apollo received the golden-coloured locks; Mars had red hair and beard; Venus, yellow, golden tresses; Minerva, flaxen braids concealed beneath her helmet. As a rule, in their [the ancient Greeks] poems, their warriors were men of reddish hair, their women with the golden tresses of Venus."

"The ancient Gauls esteemed it an honor to have the hair long, and hence Caesar, when he had conquered them, not only made them "pass under the yoke," but deprived them of their long tresses also; then those that vowed perpetual submission retired to the cloisters, and shaved their heads. This feeling of humiliation, at the cropping of the hair, descended for generations among the French people, and hence, under the first régime, to cut the hair of the heir to the crown was deemed an exclusion of his rights to the succession, and reduced him to the position of an ordinary subject. The kings and princes, during this period, wore their hair long; though the subjects were made to have their hair cut short, as emblematic of their inferior state. They were also great admirers of red hair, although their descendants, at a period later, held it in abomination."

Finally, just for fun, I'll share some of the images I came across in the book. Which depict some of the unusual hairstyles the author relates. 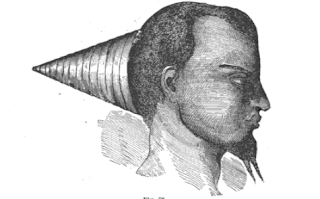 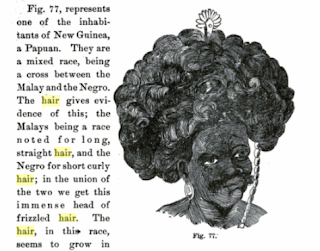 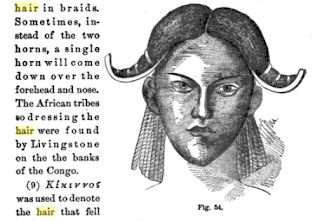 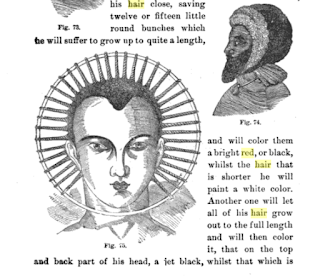 Something to consider if you're thinking of a style change.
Posted by Neil at 12:44 PM