Further digging. A few interesting quotes. First up we have one from a book titled Jewish Hearts: A Study of Dynamic Ethnicity in the United States and the Soviet Union by Betty N. Hoffman, 2012. It concerns a child getting bullied at a Russian summer camp for having red hair.

"They beat her when nobody saw because she had a very pronounced Jewish appearance. She had red hair, and in Russia red hair belongs only to Jews."

We've came across this notion before, it seems to be a bit of a recurring theme. I often wonder; is it a product of red hair being genuinely more frequent amongst Russian Jews? Or does it stem from something far deeper in culture and folklore? Perhaps it's a combination of both. We've noted before that red hair was also said to be more common amongst Jews living in Poland than amongst the native Polish population. So this idea pops up quite frequently.

Our next quote follows on from this a little. It notes the ancient bias towards red hair, and comes from a work tilted The Jewish Persona in the European Imagination: A Case of Russian Literature, by Leonid Livak (2010);

"Ancient bias against red hair, manifest in the flaming hair of Seth-Typhon and in the red-haired slave-figure of the classical comedy, persists in medieval and Renaissance drama and visual arts, as well as in European folklore, where red hair symbolizes the fires of hell and the demons stoking them. As a result, English, German, French, Polish, and east Slavic popular cultures designate red hair and freckles as peculiar to Judas and "the jews." [..]

It then continues, recounting the view of Charles Dickens.

"The same association runs in high culture, from the Spanish Inquisition's view of red hair as "jewish" by default to Dickens's vision of London's Hollywell Street (Sketches by Boz, IV:76) as full of "redheaded and red-whiskered Jews" - a demonic trait in the writer's opinion, if we were to judge by Fagin's "matted red hair"[.]"

We've mentioned the Dickensian view of red hair on here before, and the description of Hollywell Street seems to fit the theme perfectly. We've noted on this blog, perhaps a dozen times or more (it's a cherished theme, it ticks all the redhead boxes), that Dickens famously labelled the child Christ in Millais's Christ in the House of His Parents as a "wry-necked, blubbering, redheaded boy, in a bed-gown."

So Dickens clearly wasn't too fond of the colour lol 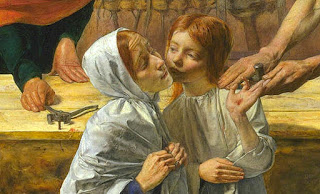 "Since I have written this, the aforesaid groom - a very small man (as the fashion is), with fiery red hair (as the fashion is not) - has looked very hard at me and fluttered about me at the same time, like a giant butterfly."

Not especially interesting, but worth noting nonetheless.
Posted by Neil at 11:17 PM