I first posted on here about Mary, Queen of Scots way back in 2011. Since then that page has clocked up more views that any other page on the site ..and by a fair few thousand. So the hair colour of wee Mary must be a hot topic. 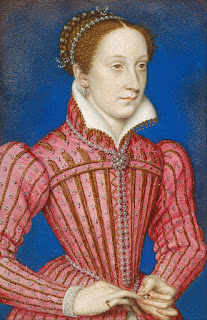 Anyway, recently I've discovered a few more quotes, so I can add a little more. Mainly thanks to this very interesting article on the history of hair turning white through fear.

The useful footnotes to the piece helped me find the following two little passages. The first one coming from a work titled The Hair: Its Growth, Care, Diseases and Treatment (which I'll be relating more information from in my next post). It notes that Mary's "auburn" hair turned grey through grief.

"Another royal instance is that of Mary, Queen of Scots, whose auburn hair, through fright and grief, was changed to gray in the course of a few days. Miss C. D. Brent, of Washington, has in her possession a lock of hair of this unfortunate individual. It is of silky texture, and of a beautiful pale auburn colour."

The text, published in 1879, also noted that the hair of Marie Antionette changed from auburn to grey.

"Marie Antoinette, the Queen of Louis XVI., whose magnificent auburn tresses changed to gray in a single night, when the royal party was arrested at Varennes."

The passage I really wanted to share though was this following one. The original was in French, in a publication titled Causeries du lundi, Volume 4 (1852). I've translated it using Google Translate and a little bit of my own tinkering, so it probably isn't quite perfect. Still, even in my uncultured hands the information and poetry radiates out.

"Mme Sand, speaking of a portrait she saw as a child at the Couvent des Anglaises, said without hesitation: "Marie was beautiful, but red-haired". Mr. Dargaud speaks of another portrait where "a ray of sunlight shines [..] curls of living and electric hair in the light", but Walter Scott, renowned as the most exact of historical novelists, paints us a picture of Marie Stuart as a prisoner in the castle of Lochleven. Showing us, as if he had seen her himself, the thick braids of dark brown hair which escaped at a certain moment from under the cap of the queen. Here we are far from red, and I see no way to reconcile everything, but to go through this hair "so beautiful, so blond and ashen" that Brantome admired, a very eye witness; hair that captivity had to whiten, and which will show the hour of death in the hands of the executioner."

So even in butchered French I guess the jury is still out somewhat. Best leave her on the boundary between redhead and non-redhead I suppose. With auburn or dark brown being our best guess. 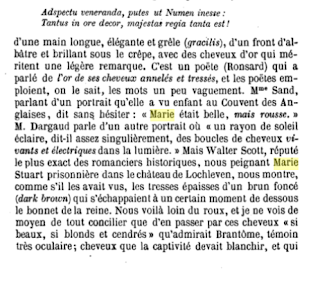