Book Review: The White Horse and the Red-haired Girl 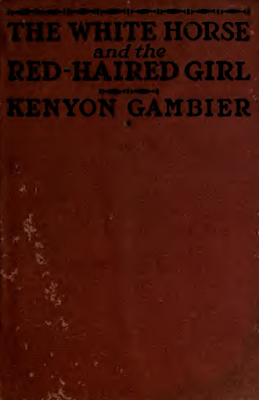 'The White Horse and the Red-haired Girl' is an early 20th century work by Lorin Andrews Lathrop (who published fiction under the pen name Kenyon Gambier).

The story is set in the run up to Christmas 1914, in the early days of World War I, and it centres around a female heroine. A plucky, but slightly privileged English woman called Peggy, who sneaks into continental Europe using a false passport to rescue her brother, who had been wounded in action.

The book is quite short - I raced through it in a couple of evenings - and it has that movie-like feel that many American novels from the first half of the 20th century seem to have. Making it very easy and comfortable to read.

I really enjoyed the book and well recommend it. It also felt quite timely to read. I felt many parts paralleled today's world of 2020. Much of the book is set in a Belgium which is occupied by the Germans. Though the country is occupied and there's a sense of mild despair and suppression amongst the people, much of life goes on as normal. Hotels are open, people sit ordering food, Christmas is celebrated. The book gives a weird sense of what war is like - outside of the actual warfare. Normal life continues, just heavily curtailed and under a black cloud.

Obviously it would be something of an exaggeration to compare the year we've just had to a year at the outset of World War I, but nevertheless I recognised the sense portrayed in the book. That feeling of living under some type of weird martial law, where the rules have suddenly changed, and people are just getting along with it as best they can. Showing their papers when needed. Some in denial, some with a sense of brooding resentment and rebellion. Many just carrying on, not really understanding the wider political events that are buffeting their lives about.

It was all quite resonant.

Another aspect that had echoes of today were the various border and travel restrictions. As America was neutral in these early days of the war American travellers could pass into German territory with relative ease. Whereas the English Peggy has to pretend to be American to get through.

Perhaps unsurprisingly the book tends to portray the British, American and Belgian characters in a positive light, and the German characters in a negative one. When I was reading I did wonder if it was perhaps deliberate propaganda used to help ease American readers into the conflict. However, the book was first published in serial form in 1918, then as a novel in 1919, so too late to help tip the balance of public opinion (the Americans entered the war in 1917). So I'm guessing the feelings and stereotypes portrayed in the work stemmed from genuine sentiment.

As well as seeing parallels with today there were also a few things that were noticeably different. You often forget how different attitudes to sex, marriage and relationships were back then. There's a female character in the book called Yvonne who's romantically involved with a German lieutenant. When I first started reading these parts I just assumed, no doubt because of my 21st century sensibilities, that they were sexually involved. It was only as I read on that it dawned on me that they were simply "courting" - emotionally involved, dating, but not physically involved. Any sexual involvement, even just kissing strictly confined to after marriage. Even for a conquering German.

This prim and properness likewise extended to our heroine Peggy, and her love interest - Roderick Stoneman, an American airman who had crossed lines raiding a German aerodrome on behalf of the French.

Being reminded of how these ideals were once held noble and lionised - where love was elevated (at least in theory) above sex - it made me slightly lament our modern ways. We seem to have lost our awe in regard 'falling in love', and with it all the romantic and heroic acts it inspires. Everything seems to be instant and materialistic now. That sense of fate has been abandoned.

Before I get lost in my own lamentations though perhaps I should get round to mentioning the actual 'red hair' parts.

As for the superstition or saying regarding the white horse and the red-haired girl it only really crops up briefly in the book. It's more a little motif than anything else.

The protagonist Peggy does indeed have red hair, and in a sense the title is a vague reference to her. However, her colouring is described more as a "burnished ruddy" shading, as opposed to a fiery red;

'Her hair was ruddy in the bright sunshine - lots of it, noticeable, marked; not a head to slip through German lines and be forgotten'

"In America," he said, "we have a saying: Where there's a white horse, there's a red-haired girl."

"Ungallant!" she said; "Peggy had the beautiful auburn hair."

Unless I'm misreading the tone I'm guessing the half-joking reply of "ungallant" tells us that calling her red-haired is viewed as something of an insult. Albeit a minor one. Hence the claim that it's a "beautiful auburn" colour instead. (Once again we see this idea of "carrot" red hair being frowned upon, but auburn being held in high esteem).

In fact, there is one other reference to red hair in the book, where a "ginger" waiter is referred to.

'but he suspected one neutral waiter, the ginger-haired
fellow who pretended to be a Swiss.'

It's not an important reference, but I guess it shows that 'ginger' tends to be used in an offhand way. It's usually simply descriptive, and rarely if ever used in a positive or poetic sense.

That aside though, and my brief despairing at the modern world aside too, the book was a very good read and I feel quite fortunate to have found it.

A freely available PDF of the work can be found here for anyone wanting to read it themselves;