Yet another red-haired St. Michael

The archangel Michael below is a detail from the Syon Cope.

The Syon Cope (a type of ceremonial cloak worn in church services and processions) is a stunning example of opus anglicanum ('English work'), a Latin term for the exquisite luxury embroideries hand-made in England in the 14th century.

The design of the cope has been carefully thought out, so that the figures and scenes which radiate out from the centre would appear upright when it was worn. The most important scenes – St Michael overcoming Satan, the crucifixion and the coronation of the Virgin – would have appeared on the wearer’s back. Other scenes from the Virgin Mary’s story would have been prominently visible across the wearer’s shoulders, while the scenes of Christ appearing to Mary Magdalene and the incredulity of Thomas would have been at the wearer’s breast. Below these two scenes, the two small male figures shown kneeling in prayer may well represent the monk, anonymous to us, who owned or commissioned the cope.

By clicking here and here you can see the whole cope and find more red-haired figures. 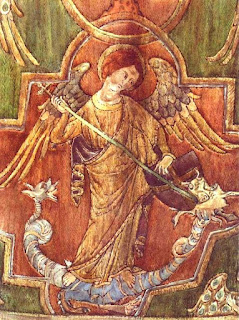