Red Locks of Witch's Hair - viewed and on record

Whilst doing the research for the last two posts I also came across this little curiosity too. A letter published in a journal titled American Notes and Queries, Volume 1 (1888), from a man who claimed to have seen and handled locks of "red" hair from witches that were trialled and burned in Germany. 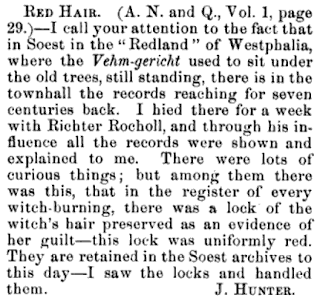 The text reads as follows;

"RED HAIR. (A.N. and Q., Vol.1, page29.)-I call your attention to the fact that in Soest in the "Redland" of Westphalia, where the Vehm-gericht used to sit under the old trees, still standing, there is in the townhall the records reaching for seven centuries back. I hied there for a week with Richter Rocholl, and through his influence all the records were shown and explained to me. There were lots of curious things; but among them there was this, that in the register of every witch-burning, there was a lock of the witch's hair preserved as an evidence of her guilt -this lock was uniformly red. They are retained in the Soest archives to this day - I saw the locks and handled them.
J. Hunter."

It's quite an interesting claim. I've had a few little searches to try to find some more information relating to this, but so far to no avail.
With it just being a letter there's the possibility that the writer may be exaggerating, or simply making things up. However, it does contain a fair bit of detail, and the way he mentions the name Richter Rocholl (another person I can find little information about) as if the reader would already be aware of such a person adds to this.
As a side note, when reading up on the Vehmic courts of old Germany referenced in the letter I found that the name "Redland" is said to stem from the fact that this blutbann or "blood justice" system of courts was still common in the area. Leaving the soil stained red with blood.

"[..] only in Westphalia, called “the Red Earth” because here the imperial Blutbann was still valid, were capital sentences passed and executed by the Vehmic courts in the Emperor's name alone."

Though it's also speculated that the "red earth" appellation may simply stem from the red colouring of some of the soil in the region. A somewhat duller explanation.

As for the locks of hair it would obviously be quite exciting if these still existed somewhere, though that's no doubt quite unlikely. Even assuming the claim being made is true.