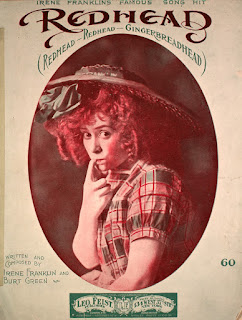 (More information can be found about Irene Franklin here.)

The recording is from 1913, and what caught me was not so much the redhead theme - quaint though that is - but the lyrics.

In particular this reference to red hair and white horses.

Freckle-face, strawberry blonde head
Here's a white horse, hide your head!
Readers familiar with this blog may remember that this is a theme that has popped up before. Back in the 19th and early 20th century there was a common saying that whenever a red-haired girl appeared a white horse would appear not long after. It was essentially an old superstition, claiming that redheaded girls and white horses were conjoined in some vague mystical way. Children (along with adults too it seems) played I spy type games based around the notion, and as a consequence the idea came into common parlance. Popping up in newspaper and journal articles of the time.
Some of which I first charted in this piece;
http://www.themythsandhistoryofredhair.co.uk/newyorktimes.html
Anyway, having dug into this topic before, that little song line caught my eye, or ear rather, and I thought I'd note it down as yet another example of a once common superstition now lost to time. Especially as the song itself is well worth sharing here for its general gingerness.
It also spurred me on to have another look to find other examples. Leading me to this curious article, which comes from a 1894 publication titled Handy-book of Literary Curiosities, by William Shepard Walsh.
https://www.google.co.uk/books
It can be found on pages 957/958 of that work. I'll quote it in full.

Red-haired girls and white horses. The popular jest about the necessary contiguity of red-haired girls and white horses is by no means modern, though in its recent revival it has swept over the country as a novelty. Some of us remember that our grandfathers used jocularly to assert it to the wondering ears of youth as a well-attested fact. In all likelihood, the saying took its origin in the old English game called sometimes the "game of the road," but more often "ups and downs," which is still a favorite among children and travelling salesmen in Great Britain. One party takes the "up" side of the street or road, the other the "down," counting one for every ordinary object and five for a white horse (a piebald counting as white), until a certain number agreed upon carries off the victory; but a red-headed woman or a donkey wins the game at once.
Another explanation refers the phrase to a North-of-Ireland superstition that the sight of a red-headed girl brings ill luck to the beholder unless he retrace his steps to the starting-point; but if he meet a white horse at any stage of his backwards progress the spell is ipso facto averted. In the midland counties of England, on the other hand, it is ill luck to meet a white horse without spitting at it. In Wexford an odd cure for the whooping-cough is suggested by current superstition. The patient trudges along the road until he meets a piebald horse, and shouts out to the rider, "Halloo, man on the piebald horse! what is good for the whooping-cough?" and no matter how absurd the remedy suggested, he will certainly be cured. In Scotland, to dream of a white horse foretells the coming of a letter.
The prejudice against red hair is as wide-spread and deep-rooted as it is unaccountable. Tradition assigns reddish hair to both Absalom and Judas. Thus, Rosalind, complaining of her lover's tardiness, pettishly exclaims, "His own hair is of the dissembling color!" and is answered by Celia, "Somewhat browner than Judas's." Marston, also, in his "Insatiate Countess," says, "I ever thought by his red beard he would prove a Judas: here am I bought and sold."
But Leonardo da Vinci, it may be noted in passing, paints Judas with black hair in his fresco "The Last Judgement."
All over Europe red hair is associated with treachery and deceitfulness. In a collection of German proverbs made by Henry Bebel as early as 1512, the following occurs: "The short in stature are naturally proud, and the red-haired untrustworthy." In England, Thomas Hughes says, "I myself know persons who on that account alone never admit into their service any whose hair is thus objectionable." An old French proverb warns you, "Salute no red-haired man nor bearded woman nearer than thirty feet off, with three stones in the fist to defend thee in thy need." In Sweden the prejudice against red hair is explained on the ground that the traitor jarl Ashbörn, who betrayed King Canute to his death, was red-headed. But even the ancient Egyptians had the same prejudice. For one thing, of course, a red-haired man was likely to be a foreigner. But, in addition, red was symbolical of Typho, a spirit of evil. Any one with ruddy complexion or red hair was suspected of being connected with the evil one. Red donkeys, especially, were looked upon as naturally evil beasts, and red oxen were offered in the sacrifices.
Though red hair is almost universally held in light esteem, the prejudice against red itself does not extend much beyond Egypt. In Congo, red is a sacred colour; in China and Japan it is used at death-beds to scare off evil spirits. In many parts of Europe, also, it is considered obnoxious to evil spirits. In old Teutonic folk-lore it was held to be symbolic of victory, possibly in reminiscence of Thor's red beard. And as it was regarded, also, as representing heat, it was therefore, in a manner, heat, just as white, representing cold, was cold itself. Sick people were wrapped in red blankets, a superstition only recently revived in the red flannel underwear supposed to be useful in cases of rheumatism. Red flowers were used for disorders of the blood, as yellow for those of the liver.
Another example of the close connection between red and white is the corpse-candle, which if it burned red signified that a man was the doomed person; if white, a woman.

I quite like that last line of the first paragraph; "but a red-headed woman or a donkey wins the game at once" 😄

The notion that in Scotland dreaming of a white horse foretells the arrival of a letter is also quite nice. Though in a rather different way.

I find it interesting too that the writer notes traditions relating to Absalom having red hair. This is something I wasn't hereto aware of, though it vaguely rings a bell. So perhaps I should look further into that one.

[Note: I've just had a little search and Absalom came up back in 2014 in an article relating to William of Orange. So that's no doubt why it rings a bell. The article notes medals struck depicting William, including one portraying him as a usurper (as Absalom was in the biblical story).

"[H]e is represented under the figure of Absalom, hanging by his red hair
(in allusion to the name of Orange) to an oak-tree[.]"
https://redhairmyths.blogspot.com/2014/11/william-of-orange-and-symbolic-red-hair.html ]
In my searching out of info about red hair and white horses I also came across a work of fiction from 1918 titled 'The White Horse and the Red-haired Girl'.
..which I'll review in my next blog post.
Posted by Neil at 11:32 PM