A few odd and intriguing things I've come across in the last week or so now. Firstly, this, from a book with a very long title which I'll just call Memoirs by Sir John Theophilus, published 1836. I think the following takes place on an island off Abu Qir Bay, on the Mediterranean coast of Egypt.


Some of the Cornish miners began to dig for water upon the island; and in one of their attempts, they fell on the crown of a cavern which was entered, and in which many human bones were found, including a skull covered with bright red hair. The atmosphere had not penetrated this cavern perhaps for centuries; many Greek characters were scratched on the walls, whose purport could not be deciphered[.]

Quite strange. I'm guessing they inadvertently came across an Egyptian tomb.

Next up, this from the Edinburgh Encyclopaedia, published 1832. I think in this passage they're talking about the island of Taiwan, formerly called Formosa.

There is, in fact, very little known respecting the eastern, or, as it is sometimes called, the southern part of the island and its inhabitants; and the accounts both of the Chinese and Dutch writers are filled with stories so obviously fabulous, as to discredit their whole testimony. Some of these accounts bear, for instance, that one of the natives was seen, who had a tail above a foot in length, covered with red hair, and resembling that of an ox, and who declared that all the inhabitants of the southern districts were born with similar appendages[.]

Finally, I noticed the following image whilst watching an alternative history video on YouTube. 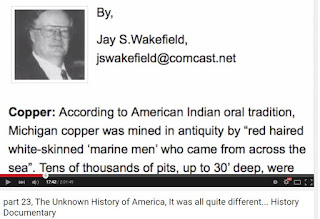 According to American Indian oral tradition, Michigan copper was mined in antiquity by "red-haired white-skinned 'marine men' who came from across the sea."

Interesting.
Posted by Neil at 8:01 PM