I thought I'd pick up the vampire theme again. Emanuela pointed out to me the similarity between vampires and the Rusalka I mentioned in a previous post. For those unfamiliar the Rusalka were female water spirits in Eastern European lore that were generally described as red-haired or light-haired (and also, oddly, green-haired). They were usually the spirits of girls that had committed suicide or that were drowned for becoming pregnant with unwanted children. They were also at times the spirits of unbaptised children. This parallels the vampire mythology, as people who committed suicide were deemed to become vampires after death. The most famous being Judas Iscariot. When we add to this the association between vampires and red hair the parallel becomes even more apparent.

I've also been wondering about the etymology of the word vampire. The second syllable, pire, is a word we've discussed before that possibly relates to red hair. Pyro being the Greek word for fire. (Phoenicians, fiery phoenix birds and pirates have also been mentioned.) It's a bit of a long shot to suggest that the 'pire' in vampire might be related too, but it's a tempting leap to make. Made more tantalising by the fact that in earlier times vampire was often rendered vampyre in the English language. It would certainly run against the grain of more accepted etymologies though and, of course, we would be left with the first part of the word to decipher, for which I have nothing :( ..still worth bearing in mind though.

Whilst looking I found a few other red hair/eastern vampire lore bits and pieces worth mentioning too. Firstly, this quote on the Wikipedia page for the Strigoi - troubled souls of the dead that rise from the grave in Romanian mythology.


In 1887, French geographer Élisée Reclus details the burials in Romania: "if the deceased has red hair, he is very concerned that he was back in the form of dog, frog, flea or bedbug, and that it enters into houses at night to suck the blood of beautiful young girls. So it is prudent to nail the coffin heavily, or, better yet, a stake through the chest of the corpse. "

Likewise I found this on the Wikipedia page for vrykolakas - undead creatures in Greek folklore often equated with vampires;


People with red hair and gray eyes at this time in history were thought to be vampires according to accounts near the region of modern Serbia.

And finally I came across a demi-goddess in Greek mythology called Empusa who also had vampiric tendencies and, maybe by this point unsurprisingly, fiery hair.


Empusa was the beautiful daughter of the goddess Hecate and the spirit Mormo. She feasted on blood by seducing young men as they slept, before drinking their blood and eating their flesh. Empusa is pictured as wearing brazen slippers and bearing flaming hair. 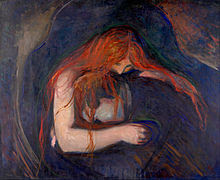 Vampyren by Edvard Munch
Posted by Neil at 6:50 PM