More red-haired aristos now. Centring around the famous Villiers family. Firstly George Villiers, 1st Duke of Buckingham. He was the favourite, and some say lover, of King James I of England. He was described as "the handsomest-bodied man in all of England; his limbs so well compacted, and his conversation so pleasing, and of so sweet a disposition."

The portrait below shows him with reddish hair and beard. 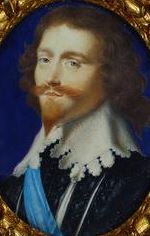 His daughter, Mary Stewart, Duchess of Richmond, was also said to be a redhead. The painting below shows Buckingham, his wife Katherine Villiers, and their children Mary and George. Mary is shown with gingery-reddish hair. 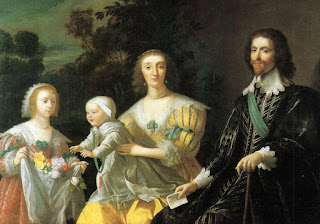 Interestingly, Katherine Villiers second husband, Randal MacDonnell, 1st Marquess of Antrim, was also a redhead. He was described as "a tall, clean-limbed, handsome man with red hair".
Posted by Neil at 1:37 PM