A few more redheads from the Napoleonic Wars now. I should say that these, like the redheads in my previous posts today, come courtesy once again of Emanuela :)

The picture below shows a red-haired Sir Charles Colville. He was a British Army officer who served in the Napoleonic Wars. 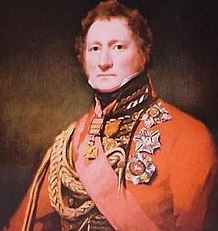 We also have news that Sir Hudson Lowe, the "gaoler" of Napoleon Bonaparte was a redhead. According to the book History of Napoleon, Volume 2 by George Moir Bussey Napoleon described him as red-haired, ruddy and freckled.


Also, while on the French theme, I should mention that François Ravaillac, the murderer of Henry IV of France, was also said to be a redhead.
Posted by Neil at 2:01 PM