...and finally today one more redhead Emanuela has kindly brought to my attention. This time it's Charlemagne's knight Roland. I came across this depiction of him on-line, showing him receiving his famed sword, Durendal, from Charlemagne.

I think in this picture he's the central figure in the full suit of armour, so we can't see his hair colour. However, pretty much everyone else in the picture looks decidedly red-haired - including Charlemagne himself. 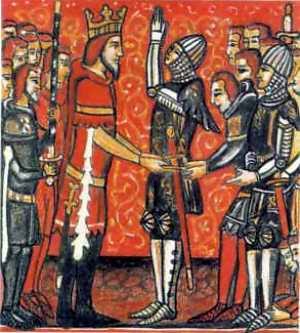 I'm not sure from what period the image dates from, so it's difficult to draw conclusions from it. Obviously the red hair shown could just be a stylistic choice on the part of the artist. The red background, red clothing and red hair make it a very red image indeed!

Emanuela's email also mentioned a fair few red-haired writers and artists that I wasn't previously aware of as well. Hopefully I'll post about them over the next week or so :)
Posted by Neil at 7:42 PM