More from the Mediterranean. This is probably my favourite thing so far. It's a short story by the Italian writer Giovanni Verga called Rosso Malpelo. It was written in 1878. The name Rosso Malpelo is Sicilian for "red evil-hair" and is the nickname given to the red-haired child who is central to the story. Interestingly, it's said that Sicilians believed that red-haired people had an evil and malicious disposition.

The story is a sad tale about a red-haired child who works in a sand mine. His father died in a mining accident and the rest of his family care little for him. He subsequently makes friends with a sickly fellow mine-worker nicknamed Frog, so-called because he walks with a limp. The story is said to be a commentary on the economic and social conditions endured by the poor working classes living in southern Italy at the time.

I really enjoyed the story. Stylistically it reminded me a little bit of Paulo Coelho's The Alchemist, although it was obviously a lot darker. An English translation of the story can be found here;-
http://books.google.co.nz/books 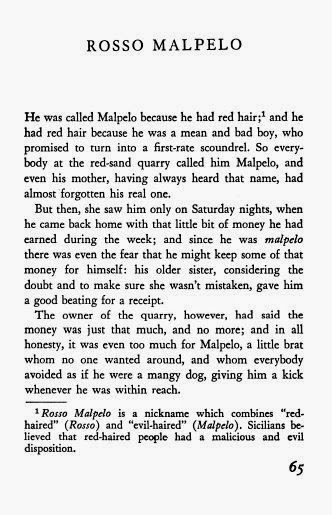